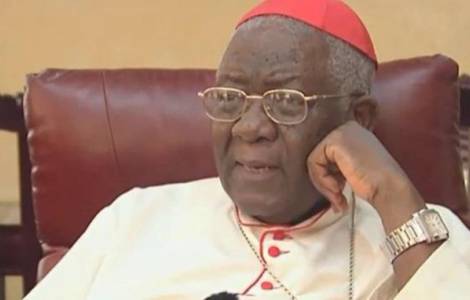 Vatican News reports that in Cameroon the abducted Cardinal Tumi was released.

Cardinal Tumi, 90, was kidnapped by alleged separatist fighters in Cameroon's North West region on Thursday. He was released on Friday.

Cardinal Tumi, who is the Archbishop Emeritus of Douala, was in the company of the paramount ruler of Nso. The traditional ruler was heading back to his traditional palace after months of self-imposed exile due to the armed conflicts between government troops and secessionists.

Sources say the convoy was stopped by a roadblock mounted by alleged separatist fighters who abducted the Cardinal and took him to an unknown location.

In an interview with Vatican News, Archbishop Samuel Kleda of Douala said that he estimates that Cardinal Tumi was abducted around 6:00pm on his way from Bamenda to Kumbo because he had been in touch with him just an hour before.

Much later on Thursday evening, Archbishop Kleda received a phone call from the Cardinal who informed him that he had been interrogated by kidnappers. His subsequent attempts to reach the Cardinal by phone on Friday morning were futile. However, the Cardinal was released later in the day on Friday after spending a night in the den of the kidnappers.

Cardinal Tumi, 90, has been vocal in calling for dialogue and peace amid the four-year-long conflict in the North West and South West regions of the country.

The Pope also prayed for the families of the young students killed on 24 October by gunmen at a private school in Kumba. He expressed sorrow at the “cruel and senseless act which tore the young innocents from life while they were attending lessons at school.”

Armed separatists, also known as “Amba boys” have been engaged in an ongoing battle with government troops in their bid to create an independent state which they wish to be called “Ambazonia.”

The crisis began in 2016 when educational and judicial institutions in the English-speaking North West and South West regions of the bi-lingual country protested the unjustified appointments of French speakers in their territory. By 2017, the situation had spiraled out of control and had become a full-fledged separatist war.

The prolonged conflict has created thousands of casualties and widespread displacement. School children in the conflict zone have only returned to school this year after almost four year of closures.

Last month, gunmen alleged to be linked to the separatist fighters, opened fire on students at Mother Francisca International Bilingual Academy in Kumba leaving at six of them dead in the deadly attack.