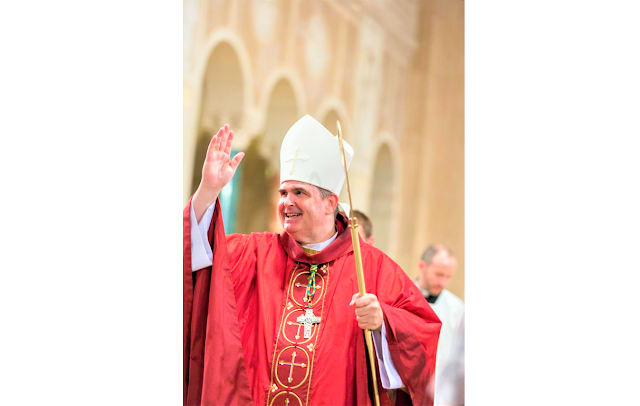 On December 1, 2020, Pope Francis appointed Bishop Michael William Fisher, Auxiliary bishop of the Archdiocese of Washington, as the 15th Bishop of Buffalo.

Bishop Fisher, aged 62, will take over leadership of Buffalo as the diocese deals with a new lawsuit.
“Today the Archdiocese of Washington is privileged to share a generous gift with the Diocese of Buffalo with Pope Francis’ appointment of Michael William Fisher to become the fifteenth Shepherd of that local Church,” said Wilton Cardinal Gregory, Archbishop of Washington, D.C.
Bishop Fisher’s installation will take place on Friday, January 15, 2021 at 2:00 p.m. in the Cathedral of Saint Joseph in Buffalo. His Eminence Timothy Cardinal Dolan, Metropolitan Archbishop of New York, will preside and Archbishop Christophe Pierre, Apostolic Nuncio to the United States, will be in attendance.
Biography:
Bishop Michael William Fisher was born on March 3, 1958 in Baltimore, Maryland. He is the eldest of five children, two sisters and two brothers. As a youth, he played Little League baseball, and wrestled, and was active in the Boy Scouts, and attained the rank of Eagle Scout. Bishop Fisher recalls always working, starting as an eight-year-old paperboy for The Baltimore Sun. Bishop Fisher attended the Baltimore Polytechnic Institute high school, and received a Bachelor of Science in Business Administration and Accounting at the University of Maryland in 1984.


With his business and accounting degree, Bishop Fisher worked as a comptroller for a psychiatric practice in Bethesda. Feeling compelled to discern a vocation to the priesthood, he entered seminary at Mount Saint Mary’s Seminary in Emmitsburg, Maryland in 1986. He was ordained a priest for the Archdiocese of Washington by Cardinal James A. Hickey at the Cathedral of St. Matthew the Apostle on June 23, 1990.
Welcome
Bishop Michael William Fisher

Get to know the 15th Bishop of Buffalo
Upon ordination, Bishop Fisher was assigned to Sacred Heart parish, La Plata. He was appointed pastor at Holy Family parish in Hillcrest Heights in 1995 and then pastor at St. John Neumann parish in Gaithersburg in 1999. He was named a Chaplain to His Holiness, a distinction that comes with the title of “Monsignor,” by Pope John Paul II in 2005. Later that year, he was appointed Vicar General for the Apostolates, where he oversaw the archdiocesan
ministries for education, ethnic ministries, social justice and service, parish life and youth ministry. In 2006 Cardinal Donald Wuerl appointed him Vicar for Clergy and Secretary for Ministerial Leadership, a position he has held for the last twelve years. In this role, Bishop Fisher oversees the recruitment, formation and care of the clergy for the archdiocese.


He was named an auxiliary bishop for the Archdiocese of Washington by Pope Francis on June 8, 2018 and ordained to the episcopate on June 29, 2018 at the Basilica of the National Shrine of the Immaculate Conception.


Over his nearly thirty years in priestly ministry Bishop Fisher has served on various boards and committees of the archdiocese, including, College of Consultors, Priest Council, Administrative Board, Priest Retirement Board, Clergy Personnel Board, Deacon Review Board, Deacon Council, Needy Parish Committee, Forward in Faith Committee. He also serves as an Ecclesiastical Counselor to the Centesimus Annus Pro Pontifice Foundation. Much of Bishop Fisher’s ministry has involved the continuing education of priests, particularly in aiding new pastors in their roles and the planning and implementation of ongoing clergy training via convocations and retreats.


Bishop Fisher attributes much of his call to the priesthood to the love and sacrifices of his parents and family, the constant prayers of a grandmother, the encouragement and example of wonderful priests, and a life-long desire to serve and leave this world a better place. Bishop Fisher’s family has roots across Maryland and Washington D.C.: his father was a Baltimorean and his mother was a Washingtonian, and extended family reside throughout the region.
Source: https://www.buffalodiocese.org/bishop-fisher