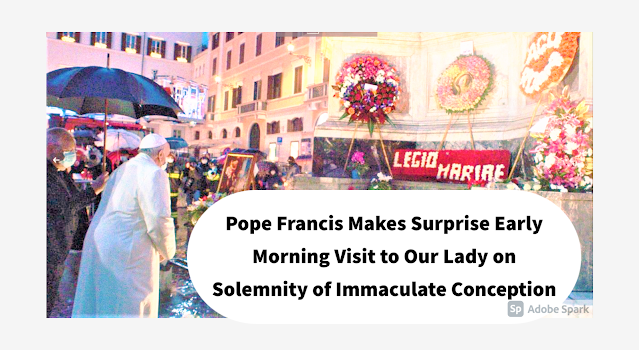 Pope prayed for Rome and the world at the Madonna's statue. On Tuesday, December 8th, at 7am, despite the rain, Pope Francis honored the Madonna before her statue in Piazza di Spagna. He also celebrated Mass in her honour in the Crypt of the Nativity in the Basilica of St. Mary Major on Tuesday morning. Vatican News reported that the Pope went to Piazza di Spagna as a private act of veneration to the Immaculate Conception, on the day on which this mystery is celebrated in the liturgical calendar. The Vatican statement released by the director of the Holy See Press Office, Matteo Bruni read:
"With the first light of dawn, under the rain, Pope Francis placed a bouquet of roses at the base of the column where the statue of the Madonna is, and turned to her in prayer, so that she might lovingly watch over Rome and its inhabitants, entrusting to her all in the city and the world who are afflicted by illness and discouragement."
Bruni's statement adds that, toward 7:15, Pope Francis left the Piazza di Spagna and went to the Papal Basilica of St Mary Major. There "he prayed before the icon Maria Salus Popoli Romani and celebrated Mass in the crypt of the Nativity." Then, Pope Francis returned to the Vatican. It had been announced on 30 November that Pope Francis had decided not to go to Piazza di Spagna, as is the usual custom. In a statement released that day, Matteo Bruni explained that the decision was due to the ongoing health crisis, “to avoid all risk of contagion caused by gatherings.”