Pope Francis says "We are called to bear witness to Jesus right where we live, in our families, at work, everywhere, even just by giving the light of a smile..." FULL TEXT +Video 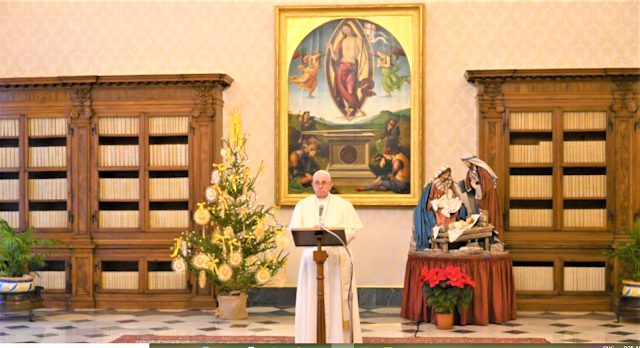 Yesterday’s Gospel spoke of Jesus, the “true light” that came into the world, the light that “shines in the darkness” and “the darkness has not overcome it” (Jn 1:9, 5). Today we see the person who witnessed to Jesus, Saint Stephen, who shines in the darkness. Those who witness to Jesus shine with His light, not with their own light. Even the Church does not have its own light. Because of this, the ancient fathers called the Church: “the mystery of the moon”. Like the moon, which does not have its own light, these witnesses do not have their own light, they are capable of taking Jesus’s light and reflecting it. Stephen was falsely accused and brutally stoned, but in the darkness of hatred (which was the torment of his stoning), he allowed the light of Jesus to shine: he prayed for his murderers and forgave them, like Jesus on the cross. He is the first martyr, that is, the first witness, the first of a host of brothers and sisters who, even until today, continue to bring the light into the darkness – people who respond to evil with good, who do not succumb to violence and lies, but break the cycle of hatred with meekness and love. In the world’s nights, these witnesses bring God’s dawn.

But how do they become witnesses? Imitating Jesus, taking light from Jesus. This is the path for every Christian: to imitate Jesus, taking light from Jesus. Saint Stephen gives us the example: Jesus had come to serve, not to be served (see Mk 10:45), and he lived to serve and not to be served, and he came to serve: Stephen was chosen to be a deacon, he became a deacon, that is, a servant, and assisted the poor at table (see Acts 6:2). He tried to imitate the Lord every day and he did it even to the end: like Jesus, he was captured, condemned and killed outside of the city, and like Jesus he prayed and forgave. While he was being stoned, he said: “Lord, do not hold this sin against them” (7:60). Stephen was a witness because he imitated Jesus.

A question could arise: are these witnesses to goodness really necessary when the world is immersed in wickedness? What good does it do to pray and forgive? Just to give a good example? But, what does that serve? No, there’s a lot more. We discover this from a detail. The text says that among those for whom Stephen prayed and whom he forgave there was “a young man named Saul” (v. 58), who “was consenting to his death” (8:1). A little later, by God’s grace, Saul was converted, received Jesus’s light, accepted it, was converted, and became Paul, the greatest missionary in history. Paul was born by God’s grace, but through Stephen’s forgiveness, through Stephen’s witness. That was the seed of his conversion. This is the proof that loving actions change history: even the ones that are small, hidden, everyday. For God guides history through the humble courage of those who pray, love and forgive. There are so many hidden saints, saints who are next-door, hidden witnesses of life, who with little acts of love change history.

To be witnesses to Jesus – this is true for us as well. The Lord wants us to make our lives masterpieces through the ordinary things, the everyday things we do. We are called to bear witness to Jesus right where we live, in our families, at work, everywhere, even just by giving the light of a smile, a light that is not our own – it comes from Jesus – and even just by fleeing the shadow of gossip and tattle-taling. And then, when we see something that is wrong, instead of criticizing, badmouthing and complaining, let us pray for the one who made a mistake and for the difficult situation. And when an argument starts at home, instead of trying to win it, let us try to diffuse it; and start over again each time, forgiving the one who offended. Small things, but they change history, because they open the door, they open the window to Jesus’s light. Saint Stephen, while he was on the receiving end of the stones of hatred, reciprocated with words of forgiveness. He thus changed history. We too can change evil into good each time just as a beautiful proverb proposes which says: “Be like the palm tree: they throw stones at it and it drops down dates”.

Today, let us pray for those suffering persecution because of the name of Jesus. They are many unfortunately. There are more than in the beginning of the Church. Let us entrust these brothers and sisters to the Madonna, that they might respond with meekness to oppression and that, as true witnesses to Jesus, they might conquer evil with good.

I greet all of you, families, groups and individual members of the faithful who are following this moment of prayer through the means of social communication. We have to do it like this to avoid people coming to the Square. Thus, we are collaborating with the regulations that the Authorities have established, to help all of us escape this pandemic.

May the joyous Christmas atmosphere that continues today fill our hearts again, enkindling the desire in everyone to contemplate Jesus in the Crib, so as to serve Him and love Him in the persons who are near us.

In these days, I have received Christmas greetings from Rome and other parts of the world. It is impossible to respond to everyone, but I take this opportunity now to express my gratitude, especially for the gift of prayer that you have offered for me, which I willingly reciprocate.

Happy Feast of Saint Stephen. Please, continue to pray for me.

Enjoy your meal and arrivederci!