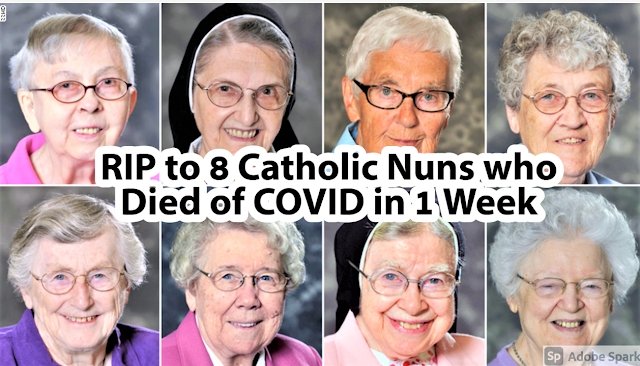 They belonged to the order of School Sisters of Notre Dame Central Pacific Province.

“The Sisters, we’re being extra careful in terms of getting their meals in rooms and they can’t congregate together,” Sister Debra Sciano, Provincial Leader of the School Sisters of Notre Dame Central Pacific Province said. “More testing, being tested twice a week for the virus.”

Sciano says they are heartbroken to lose these eight women. Combined, they had over half a millennium of service to the community.

Here is a brief glimpse into their lives:

Sister Mary Elva Weisner had a special love for teaching children the sacraments, Sciano said. She would sing with them and bring a bright and cheery attitude.

Sister Mary Alexius Portz was a musician. While all of these women were retired, Sciano says Portz worked into her 80s, giving music lessons.

Sister Rose Feess was a staunch advocate for young women. Sciano says she focused her efforts at the Notre Dame School in Milwaukee, where she focused on helping Hispanic girls succeed.

Sister Cynthia Borman, an educator as well, was also something of a handy-woman. She was the fixer-upper of the church. Sciano says if you needed something fixed, she was the one to turn to.

Sister Dorothy MacIntyre was more into arts and crafts. A giver, she’d gift her works to people and create other things to share with people.

Sister Joan Emily Kaul served as a secretary for many parishes in the area on top of teaching. It was her smile that cut through to people’s hearts; bringing joy to many.

Sister Michael Marie Laux has been all over the world, sharing her knowledge. From Guam to Alaska back to Cream City. Her work around the world is something Sciano marvels at.

Sister Lillia Langreck’s work for much of the last 60 years is something you could see her doing to this very day. She was heavily involved in racial and social justice efforts alongside people like Father James Groppi during the Milwaukee marches for fair housing, integrated bussing and more.

“We realize, we’re not the only ones,” Sciano said. “So many are suffering. We appreciate the love, the care, the concern from the broader community but we encourage everyone to support those who have lost loved ones and who continue to have economic issues and so many other things. We’re with them as well. We continue to do that as we struggle. Of course, it is difficult but for us, in the church, we’re celebrating the season of advent right now. It’s a time of waiting. It’s really a poignant time as we experience these losses, it’s in preparation for celebration. It’s letting go during the time of advent that’s much more dramatic at this time.”

FRLBJ said…
Many of the SSND sisters left the faith. It is terrible that the physicians failed to use the known effective therapeutics like HCQ,zinc, and antibiotic. Also, chlorine dioxide for low oxygen. Also, IV vitamin C!
December 20, 2020 at 11:32 PM