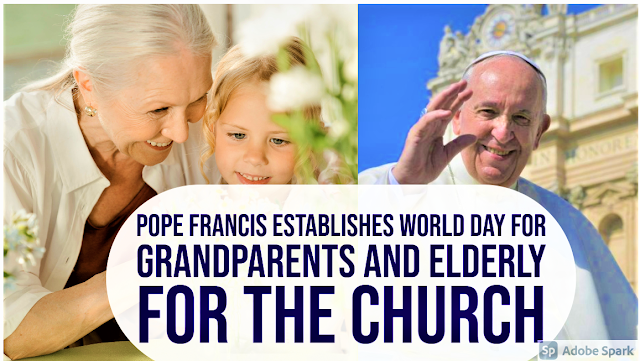 Pope Francis has decided to institute a Church-wide celebration of a World Day for Grandparents and the Elderly. It will be held on the fourth Sunday of July, near to the liturgical memorial of Saints Joachim and Anne, the grandparents of Jesus. After the Angelus on Sunday, Pope Francis announced the institution of World Day for Grandparents and the Elderly, which will be starting on July 25, 2021 and every 4th Sunday in July.
He announced this while mentioning the upcoming feast of the Presentation of Jesus in the Temple – when the elderly Simeon and Anna encountered the child Jesus and recognized Him as the Messiah – Pope Francis said, “the Holy Spirit even today stirs up thoughts and words of wisdom in the elderly.” The voice of the elderly “is precious,” he said, “because it sings the praises of God and preserves the roots of the peoples.”
The elderly, he continued, “remind us that old age is a gift and that grandparents are the link between the different generation, to pass on to the young the experience of life.”
The elderly must not be forgotten The Holy Father said he instituted the World Day of Grandparents and the Elderly because “grandparents are often forgotten, and we forget this wealth of preserving roots and passing on” what the elderly have received. He emphasized the importance of grandparents and grandchildren getting to know one another, because “as the prophet Joel says, grandparents seeing their grandchildren dream,” while “young people, drawing strength from their grandparents, will go forward and prophesy.” First fruits of the Amoris Laetitia Family Year In a press release following the announcement, Cardinal Kevin Farrell, Prefect of the Dicastery for Laity, Family and Life, the establishment of the Day of Grandparents and the Elderly “is the first fruits of the Amoris Laetitia Family Year, a gift to the whole Church that is destined to continue into the future.”
The statement from the Dicastery notes that Pope Francis is expected to celebrate the first World Day by presiding at Mass on the evening of Sunday, 25 July, in St Peter’s, subject to health measures in place at the time.
Edited from Vatican News
***********************************************
Please SUBSCRIBE to CatholicNewsWorld's Youtube Channel!
Thanks and God bless!
www.youtube.com/catholicnewsworld