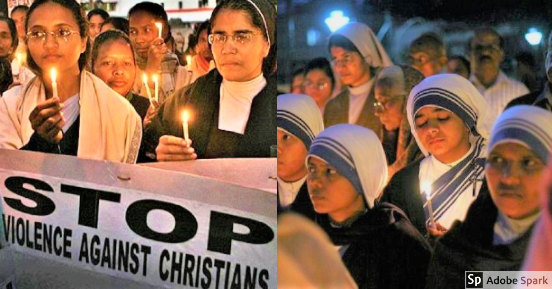 Asia News reports of an Open letter to the Pakistani prime minister which calls for action to stop religious intolerance
by Shafique Khokhar
Samson Salamat, president of an inter-religious movement indicates some priorities "to control the further damage and destabilization" of the country, including the "revision" of the blasphemy law which "continues to frighten citizens belonging to minorities and has led to 'killing of innocents.”

Lahore (AsiaNews) - Samson Salamat (pictured), Mr. Samson Salamat, Chairman Rwadari Tehreek has urged Prime Minister of Pakistan Mr. Imran Khan and his government for immediate, effective and serious actions to stop the increasing incidents and trends of religious intolerance, instigation of violence, provocation, hate speech, and religiously motivated violence.
Salamat in his Open Letter to Prime Minister writes, “On behalf of my fellow Pakistanis and members of Rwadari Tehreek- Pakistan, I would like to thank and congratulate your government for sponsoring the resolution titled “Promoting a culture of peace and tolerance to safeguard religious sites” (document A/75/L.54) which was adopted by the United Nations General Assembly on January 21, 2021, to condemn all acts of threats and violence, destruction, and damage directed against religious sites, to denounce any move to obliterate or forcibly convert any religious sites and also expresses concerns on the rise of racial and religious intolerance and negative stereo-typing of religions and condemns any advocacy of national, racial or religious hatred that promotes discrimination, hostility or violence.”
The letter further says, “While we welcome this latest initiative of your government at the United Nations, we would like to draw your attention to the rise of religious intolerance, hatred, and religiously motivated violence in our own society which needs to be addressed immediately, seriously, and effectively to control the further damage and de-stabilizing of Pakistan - the violent attacks on Hazara community, destruction of Hindi Temple in Karak and attacks on temples in Sindh, hate speech and use of abusive and instigative language on the issue of construction of Hindu temple in Islamabad, consistent target the killing of Ahmadi citizens, consistent hate speech against Christians on social media, misuse of blasphemy laws, abduction, and forced religious conversion of the Christian and Hindu minor girls are some of the critical issues which need your immediate attention”.
Salamat adds in his letter that sadly, in almost all the above mentioned issues and incidents the authorities’ remained failed to provide safeguards and there has been hardly any significant action (s) against the extremist and terrorist outfits or individuals involved in creating this menace and destroying the spirit of the vision of the Quaid-e-Azam Muhammed Ali Jinnah, the founder of our beloved country.
Chairman Rwadari Tehreek Pakistan on behalf of Rwadari Tehreek recommended the following steps and initiatives to deal with religious intolerance, extremism and terrorism:
Ensure that the constitutional and legal systems provide effective guarantees of freedom of thought, religion or belief, including the provision of effective remedies in cases where the right to freedom of religion or belief is violated.
Furthermore, ensure, in particular, that no one within their jurisdiction is deprived of the right to life, liberty, and security of a person and not to be subjected to torture or other cruel, inhuman or degrading treatment on the basis of religion or belief.
The Government should notify the promises made with the Hazara Community after your visit to Quetta as Prime Minister after Mach incident to ensure that the commitments are translated into policies and practical actions to effectively protect the lives of Hazara citizens to end more than a decade of bloodshed.
In order to ensure that the society is free of intolerance, violent extremism and terrorism, the implementation of the National Action Plan should be ensured in letter and spirit.
Indiscriminate stern action is immediately required against banned extremist outfits to stop their activities e.g. Public Rallies, meetings, funds collection, Sit-ins and all acts of hate speech and instigation of violence.
The misuse of blasphemy laws continues to settle personal and frightening the citizens belonging to minorities and has led to the killings of innocent, and destruction of their worship places and other properties, therefore a review of these laws should be initiated to refrain from further damage.
The Syllabus should be made free of all biases and bigotry to de-radicalize youth and the entry of extremist elements to the educational institutions should be stopped.
Zero Tolerance Policy should be adopted and implemented against hate speech, abusive and instigative language against Hindus, Christians, Ahmadi community, and Shia Muslims which is currently at a peak.
Salamat hoped that the issues and concerns mentioned in the letter shall be thoroughly addressed by the Prime Minister of Pakistan and his Government with practical steps to end religious intolerance, hate speech, and religiously motivated violence from our society.
FULL TEXT Source: Asia News IT