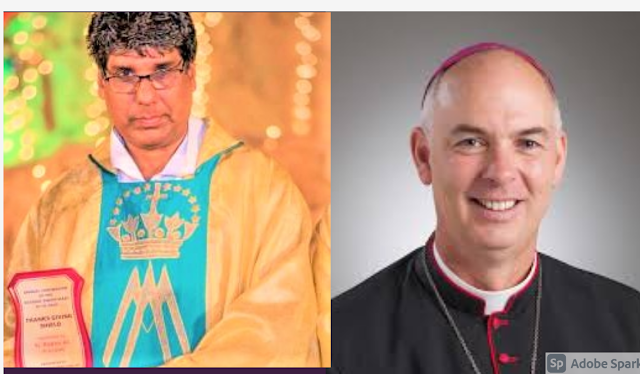 Vatican News reports that Pope Francis appointed Bishop Paul Martin as Coadjutor Archbishop of Wellington, NZ; and Father Khalid Rehmat as Vicar Apostolic of Quetta, Pakistan.
Pope Francis on Friday named Bishop Paul Martin, S.M., as Coadjutor Archbishop of the Metropolitan Archdiocese of Wellington, N.Z. Bishop Martin has been serving as Bishop of the Diocese of Christchurch since 2018.
Bishop Paul Martin's  Biography:
Ordained deacon: 15th November 1992
Ordained priest: 4th September 1993
Ordained bishop: 3rd March 2018
Bishop Paul was born in Hastings and is one of five children. He attended primary school at St Joseph’s in Hastings and secondary school at St John’s College.
In 1985 he entered formation for the Society of Mary. In 1991 he spent time working in an Aboriginal Community in the Northern Territory, Australia. In 1993 he completed a Baccalaureate in Sacred Theology at the Angelicum University of Rome and studied to become a teacher.
Upon returning to New Zealand Bishop Paul was in teaching roles, including St Bede’s College. In 2014 Bishop Paul was Assistant Provincial and Provincial Bursar for the Society of Mary, before taking up the position of Bursar General in Rome.
Pope Francis appointed Paul Martin as Bishop of Christchurch on 5 December 2017. He was ordained a Bishop of 3 March 2018, and installed as Bishop of Christchurch the next day.
Curriculum vitae of Father Khalid Rehmat
Also on Friday, Pope Francis appointed Father Khalid Rehmat, O.F.M. Cap., who has been serving as Custos of the 'Mariam Siddeeqa Capuchin Custody' in Pakistan.
Fr. Khalid Rehmat, was born on 5 August 1968 in Mianwali, Diocese of Islamabad-Rawalpindi. Before entering religious life, he was a teacher in a primary school.
He completed his priestly formation at St. Mary's Minor Seminary in Lahore, professing Solemn Vows on 28 December 2007.
He was ordained a priest on 16 August 2008.
After ordination to the priesthood, he held the following positions: Assistant to the Rector of the Formation House of the Capuchin Friars Minor in Lahore (2008-2011); teacher at St Mary's Minor Seminary, in the formation house of the Franciscan Fathers (2008-2014) and in the Inter-Congregational Program, in Lahore (2010-2014); Coordinator of the Educational Commission of the Vice-Province of the Order of Capuchin Friars Minor in Pakistan (2011-2014); Editor of the magazine Catholic Naqeeb (since 2013) and Member of the College of Consultors of the Metropolitan Archdiocese of Lahore (2015-2017); Member of the Archdiocesan Biblical Commission of Lahore (2016-2017); Coordinator of the Economic Commission of the Vice-Province of the Order of Friars Minor Capuchin in Pakistan (2017-2020); Parish Priest of Our Lady of Mount Carmel in Adah, Sialkot, in the Metropolitan Archdiocese of Lahore (2014-2020); and Member of the Provincial Council of the Capuchin Fathers, until October 2020.
Subsequently, he was Custos of the Order of Capuchin Friars Minor in Pakistan.
Source: VaticanNews.va - Images - Fides and Bishops' Conference of NZ