RIP Archbishop Philip Tartaglia - Death of the Archbishop of Glasgow, Scotland Suddenly at Age 70 who had Tested Positive for COVID 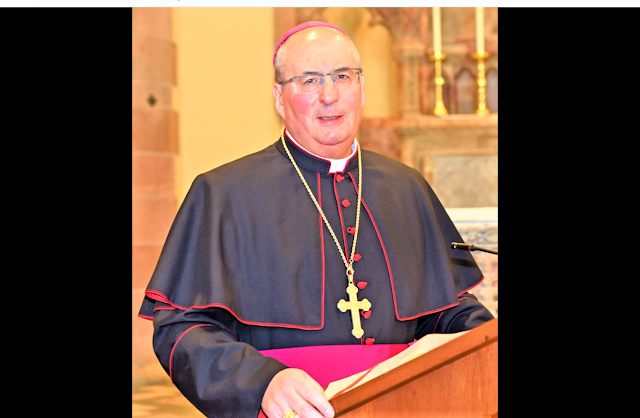 Archdiocese of Glasgow release:
It is with the greatest sorrow that we announce the death of our Archbishop.

The Archbishop of Glasgow, Philip Tartaglia, has died suddenly at his home in Glasgow. He was 70 years old.

Archbishop Tartaglia, who had served as Archbishop of Glasgow since 2012, had tested positive for COVID 19 shortly after Christmas and was self-isolating at home. The cause of death is not yet clear.

The Archbishop had served as leader of Scotland’s largest Catholic community since 2012.

The Pope’s Ambassador to Great Britain, Archbishop Claudio Gugerotti has been informed.

It will be for Pope Francis to appoint a new Archbishop to succeed Archbishop Tartaglia, but until then the Archdiocese will be overseen by an administrator.

Please pray for the repose of the soul of Archbishop Philip, for his family and friends and people of the Archdiocese.

Philip Tartaglia was born at Glasgow on 11th January 1951. He is the eldest son of Guido and Annita Tartaglia and had three brothers and five sisters. After his primary schooling at St. Thomas’, Riddrie, he began his secondary education at St. Mungo’s Academy, Glasgow, before moving to the national junior seminary at St. Vincent’s College, Langbank and, later, St. Mary’s College, Blairs, Aberdeen. His ecclesiastical studies were completed at the Pontifical Scots College, and the Pontifical Gregorian University in Rome.

He was ordained Priest by then-Archbishop Thomas Winning in the Church of Our Lady of Good Counsel, Dennistoun on 30th June 1975. He then returned to Rome to study for his Doctorate in Sacred Theology.

On completing his Doctorate in 1980, he was appointed assistant priest at Our Lady of Lourdes, Cardonald, while at the same time becoming visiting lecturer at St. Peter’s College, Newlands, Glasgow.

He served as Rector until 1993 when he was appointed to St. Patrick’s, Dumbarton, as Assistant Priest before being appointed Parish Priest of St. Mary’s, Duntocher in 1995. In 2004, the Bishops’ Conference appointed him Rector of the Pontifical Scots College, Rome.

On 13th September 2005, Pope Benedict XVI nominated him Bishop of Paisley. On 20 November 2005, he was ordained Bishop in St Mirin's Cathedral by Archbishop Mario Conti who he was to succeed as Archbishop of Glasgow

On 24th July 2012, Bishop Tartaglia was appointed Archbishop of Glasgow and was installed at St Andrew's Cathedral, Glasgow, on Saturday 8th September 2012, the Feast of the Nativity of the Blessed Virgin Mary.

Archbishop os St Andrews and Edinburgh, Leo Cushley, said: "I was shocked and deeply saddened to learn of the unexpected death of Archbishop Philip. He was a dear friend whom I’ve known most of my life and his learning, wisdom and experience benefited so many people, in Paisley, Glasgow and beyond.

"He will be sorely missed by everyone in the Catholic Church in Scotland. My affection and prayers go to his family, who are also dear friends, and to all the clergy and people of the Archdiocese. May the Lord welcome him into paradise.”

He said: "Archbishop Tartaglia throughout his life was a faithful servant of the Lord and a caring shepherd of the Diocese of Paisley between 2005 and 2012.   He was a much loved Bishop of Paisley and will be remembered fondly by many. May he rest in peace."

Bishop Toal of Motherwell said: "On behalf of everyone in the Diocese of Motherwell I express our shock and sadness on the sudden death of Archbishop Philip Tartaglia. We offer the support of our prayers to his family and the community of the Archdiocese of Glasgow, and join with them in commending his soul to the tender mercy of our Loving Father through the saving power of Our Lord Jesus Christ.

"In the years I have shared with him in the episcopal ministry I have heard him repeatedly express his steadfast belief in Christ and the need for Him to be at the heart of all we say and do in the Church,

his Body. His faith was straight-forward and re-assuring, and from that came the wise counsel which he offered in the deliberations about and the decisions taken in so many areas of the Church’s

Mission in Glasgow Archdiocese and In the Bishops’ Conference of Scotland.

"As his brother bishops we will miss him greatly, and that sense of loss is shared with so many others.

"It is good to remember with gratitude his priestly minister before he became a Bishop – in the parishes he served in and in the seminaries he taught and rectored in. Those who attended his

classes remember him as a gifted lecturer, and in later years he looked back with some nostalgia to these times of theological investigation and teaching as a time of much fulfilment and contentment.

"He loved his native city, and the family and community he grew up in. It was hard to leave his parents and younger brothers and sisters to go to Junior Seminary to train for the priesthood, but it must have been a great joy for the family that both he and his brother Gerry were ordained as priests. We offer our sympathy now to all of them as they grieve the loss of their brother Philip, and pray with them that he will be united with their beloved parents and their recently deceased sister in Paradise, in the blessed company of Our Lady, St Mungo, and all the Saints.

"May his soul , and the souls of all the faithful departed, rest in peace. Amen."

President of the Bishops’ Conference of Scotland, Bishop Hugh Gilbert has issued the following statement:

“It is with the deepest sadness that we have learned today on the Feast of St. Kentigern (Mungo) of the death of our brother bishop and friend Philip Tartaglia. His loss to his family, his clergy and the people of the Archdiocese of Glasgow will be immeasurable but for the entire Church in Scotland this is a day of immense loss and sadness.

"He was a gentle, caring and warm-hearted pastor who combined compassion with a piercing intellect. His contribution to the work of the Bishops’ Conference of Scotland over the past sixteen years was significant and we will miss his wisdom, wit and robust Catholic spirit very much.

"On behalf of the Bishops of Scotland, we commend his soul into the hands of God and pray that he may enjoy eternal rest.”