Saint January 20 : St. Sebastian a Martyr and the Patron of Soldiers and Athletes with Special Prayer 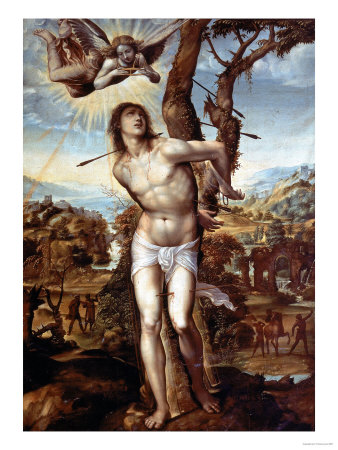 A Saint who Died in 288AD
Patron of:
Soldiers, plagues, arrows,  athletes
Roman martyr; little more than the fact of his martyrdom can be proved about St. Sebastian. In the "Depositio martyrum" of the chronologer of 354 it is mentioned that Sebastian was buried on the Via Appia. St. Ambrose ("In Psalmum cxviii"; "Sermo", XX, no. xliv in PL, XV, 1497) states that Sebastian came from Milan and even in the time of St. Ambrose was venerated there. The Acts, probably written at the beginning of the fifth century and formerly ascribed erroneously to Ambrose, relate that he was an officer in the imperial bodyguard and had secretly done many acts of love and charity for his brethren in the Faith. When he was finally discovered to be a Christian, in 286, he was handed over to the Mauretanian archers, who pierced him with arrows; he was healed, however, by the widowed St. Irene. He was finally killed by the blows of a club. These stories are unhistorical. The earliest mosaic picture of St. Sebastian, which probably belongs to the year 682, shows a grown, bearded man in court dress but contains no trace of an arrow. It was the art of the Renaissance that first portrayed him as a youth pierced by arrows. In 367 a basilica which was one of the seven chief churches of Rome was built over his grave. The present church was completed in 1611 by Scipio Cardinal Borghese. His relics in part were taken in the year 826 to St. Medard at Soissons. Sebastian is considered a protector against the plague. Celebrated answers to prayer for his protection against the plague are related of Rome in 680, Milan in 1575, and Lisbon in 1599. His feast day is 20 January.
Prayer to Saint Sebastian
Dear Commander of the Roman Emperor’s court, You chose to also be a soldier of Christ
And dared to spread faith in the King of Kings, For which you were condemned to die.
Your body, however, proved athletically strong And the executing arrows extremely weak. So another means to kill you was chosen And you gave your life to the Lord.
May athletes always be as strong as their faith As their Patron Saint so clearly has been.
Amen.