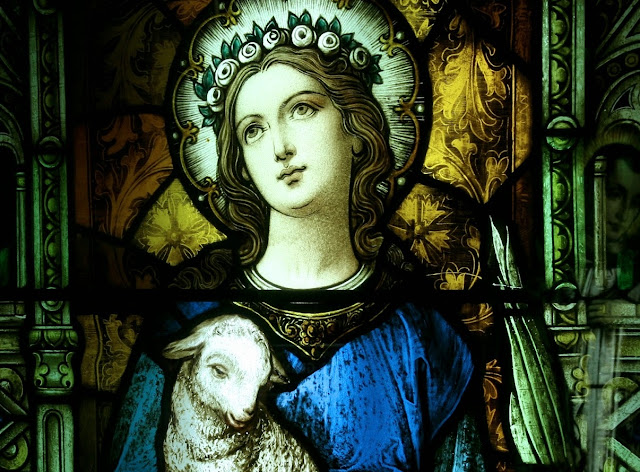 Born:
291
Died:
304
Major Shrine::
Church of Sant'Agnese fuori le mura and the Church of Sant'Agnese in Agone, both in Rome
Patron of:
Betrothed couples; chastity; Children of Mary; Colegio Capranica of Rome; crops; gardeners; Girl Scouts; girls; rape victims; virgins
Of all the virgin martyrs of Rome none was held in such high honour by the primitive church, since the fourth century, as St. Agnes. In the ancient Roman calendar of the feasts of the martyrs (Depositio Martyrum), incorporated into the collection of Furius Dionysius Philocalus, dating from 354 and often reprinted, e.g. in Ruinart [Acta Sincera Martyrum (ed. Ratisbon, 1859), 63 sqq.], her feast is assigned to 21 January, to which is added a detail as to the name of the road (Via Nomentana) near which her grave was located. The earliest sacramentaries give the same date for her feast, and it is on this day that the Latin Church even now keeps her memory sacred. Since the close of the fourth century the Fathers of the Church and Christian poets have sung her praises and extolled her virginity and heroism under torture. It is clear, however, from the diversity in the earliest accounts that there was extant at the end of the fourth century no accurate and reliable narrative, at least in writing, concerning the details of her martyrdom. On one point only is there mutual agreement, viz., the youth of the Christian heroine. St. Ambrose gives her age as twelve (De Virginibus, I, 2; P.L., XVI, 200-202: Haec duodecim annorum martyrium fecisse traditur), St. Augustine as thirteen (Agnes puella tredecim annorum; Sermo cclxxiii, 6, P.L., XXXVIII, 1251), which harmonizes well with the words of Prudentius: Aiunt jugali vix habilem toro (Peristephanon, Hymn xiv, 10 in Ruinart, Act. Sinc., ed cit. 486). Damasus depicts her as hastening to martyrdom from the lap of her mother or nurse (Nutricis gremium subito liquisse puella; in St. Agneten, 3, ed. Ihm, Damasi epigrammata, Leipzig, 1895, 43, n. 40). We have no reason whatever for doubting this tradition. It indeed explains very well the renown of the youthful martyr. Catholic Encyclopedia
________________________________ __________________________
Prayer in Honor of St. Agnes
O Sweetest Lord Jesus Christ, source of all virtues, lover of virgins, most powerful conqueror of demons, most severe extirpator of vice! deign to cast Thine eyes upon my weakness, and through the intercession of Mary most blessed, Mother and Virgin, and of Thy beloved spouse St. Agnes, glorious virgin and martyr, grant me the aid of Thy heavenly grace, in order that I may learn to despise all earthly things, and to love what is heavenly; to oppose vice and to be proof against temptation; to walk firmly in the path of virtue, not to seek honors, to shun pleasures, to bewail my past offenses, to keep far from the occasions of evil, to keep free from bad habits, to seek the company of the good, and persevere in righteousness, so that, by the assistance of Thy grace, I may deserve the crown of eternal life, together with St. Agnes and all the saints, forever and ever, in Thy kingdom. Amen. (Indulgence 100 days, Pius IX, 1854)