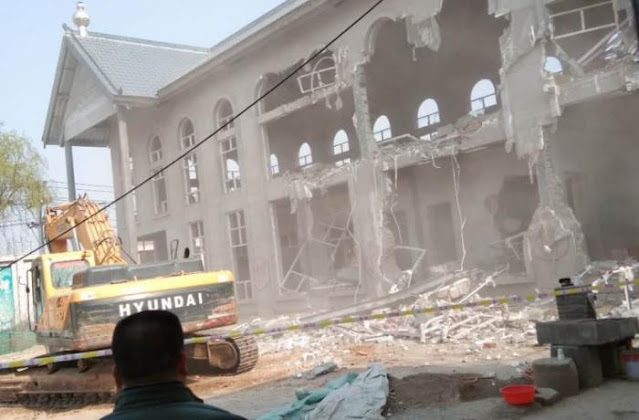 Calling for Greater Efforts to Promote Culture of Tolerance,
UN Release - General Assembly Adopts Resolution Condemning Offences against Religious Sites Calling for greater efforts to promote a culture of tolerance and peace at all levels, the General Assembly adopted a resolution today inviting the Secretary‑General to convene a global conference aimed at advancing the United Nations Plan of Action to Safeguard Religious Sites, involving Governments, political figures, religious leaders, civil society and the media, among other stakeholders.

Introducing the draft resolution titled, “Promoting a culture of peace and tolerance to safeguard religious sites” (document A/75/L.54), the representative of Saudi Arabia said the text condemns offences or mockery against religious sites and symbols, rejects the use of violence to express any point of view and aims to develop a culture of peace as a shield against extremism and intolerance.  Noting that its facilitators worked for months to incorporate the views of all parties, he said its co-sponsors stand united in support of freedom of belief, opinion and expression, while also requiring mutual respect and continuous dialogue.

By other terms of the resolution — which the Assembly adopted without a vote — Member States denounced any moves to obliterate or forcibly convert religious sites, while strongly deploring violence against persons on the basis of their religion or belief.  Expressing concern that racial and religious intolerance and stereotyping are on the rise, the Assembly condemned any advocacy of national, racial or religious hatred that constitutes incitement to discrimination, hostility or violence, and urged States to take effective measures to combat such incidents.  Members further emphasized that freedom of religion or belief, freedom of opinion and expression, the right to peaceful assembly and the right to freedom of association are interdependent, interrelated and mutually reinforcing.  They called on the United Nations to pursue strategies, educational initiatives and global communications campaigns aimed at strengthening the protection of religious sites and cultural heritage.

The representative of Portugal, speaking in explanation of position on behalf of the European Union and several other countries, underlined those nations’ staunch support of freedom of expression and belief.  “These values are at the core of our actions at the United Nations,” he said, citing two Assembly resolutions on those matters — including a recent text which sought to combat negative stereotyping or discrimination, as well as violence against persons based on religion.  Noting that the Assembly’s Third Committee (Social, Humanitarian and Cultural) is the right forum to consider such issues, he nevertheless emphasized the importance of free expression and freedom of the media to ensure an engaged citizenry.  While he would have preferred today’s resolution to focus solely on safeguarding religious sites in order to avoid overlap with previous resolutions, he joined the consensus, noting that the draft adopted had been much improved from its original version thanks to transparent negotiations.

The speaker for the United States underscored the core values of justice, democracy, human rights and fundamental freedoms, while rejecting violence.  Voicing support for General Assembly resolution 55/254 on the protection of religious sites, he stressed that odious or offensive speech is not in itself tantamount to violence and should not be restricted.  Rather, the United States advocates for robust speech protections alongside strong legal regimes that deal with hateful acts.  Associating himself with the statement delivered by the representative of Portugal, he added that respectful and constructive debate at the local, national and international levels can play an important role in combating hatred.

Morocco’s representative was among the speakers who spotlighted multiple recent attacks against mosques, synagogues and temples, noting that such incidents remain “fresh in our memories” and call for a collective global response.  The Assembly’s resolution underlines the importance of cooperation in order to improve Member States’ abilities to protect against such attacks, he said, adding that its adoption demonstrates the international community’s firm support for protecting religious sites around the world.

The speaker for India said that, as a multicultural State, his country safeguards all religious and cultural rights and protects places of worship.  In today’s world, religious and cultural sites remain highly vulnerable to attacks by violent extremists, as was seen recently when a historic Hindu temple was set ablaze in Khyber Pakhtunkhwa Province in Pakistan, while authorities stood idly by.  Warning against the selective enforcement of laws against attacks on religious sites, he stressed that, as long as such selectivity exists, the world will never be able to foster a real culture of peace.  Indeed, it is ironic that the country where that attack took place, and where minority rights are regularly violated, is one of the text’s co-sponsors.  “This resolution cannot be a smokescreen for countries like Pakistan to hide behind,” he stressed.

The representative of Pakistan, exercising his right of reply, categorically rejected the “unwarranted assertions” made against his country by India’s delegate.  Such accusations are often levelled by India against Pakistan, despite the fact that it is India that blames Muslims for spreading COVID-19, incites people against the so-called crime of “love jihad” and commits extrajudicial killings of innocent Kashmiris.  As a leading State sponsor of discrimination against minorities, India is in no position to blame others, he stressed, describing the strong steps taken by Pakistan in response to the attack on the temple in Khyber.

In other business, the Assembly took note of a letter addressed to its President from the Secretary-General (document A/75/661/Add.1), informing members that Libya, Niger and Zimbabwe have made the necessary payment to reduce their arrears below the amount specified in Article 19 of the United Nations Charter.