What is Baptism? - When we become Children of God cleansed from Sin - All You Need to Know! Baptism Explained from the Catechism to Share! 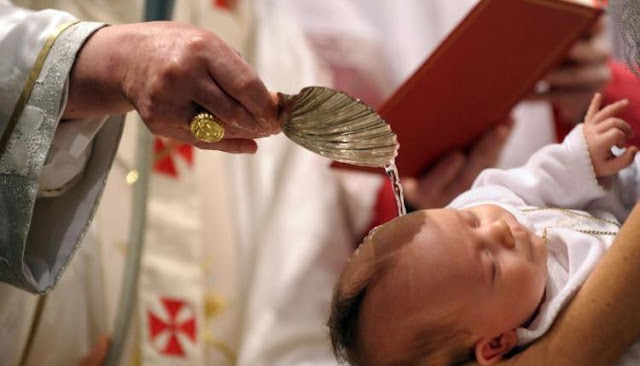 The first sacrament of initiation into the Church is Baptism; when we become God's special children cleansed from sin.
Here is some information on this Important Sacrament of the Church:
THE SACRAMENT OF BAPTISM
1213 Holy Baptism is the basis of the whole Christian life, the gateway to life in the Spirit (vitae spiritualis ianua),4 and the door which gives access to the other sacraments. Through Baptism we are freed from sin and reborn as sons of God; we become members of Christ, are incorporated into the Church and made sharers in her mission: "Baptism is the sacrament of regeneration through water in the word."5
IMAGE: Giovanni Bellini (Venice, c. 1432 - Venice, 1516) Baptism of Christ 1501)

Renew your Promises :  (It is customary to renew Baptism promises )
Lord Jesus Christ,I acknowledge You as King of the universe.All creation was made for You.Exercise all Your sovereign rights over me.I renew my baptismal promises,renouncing Satan and all his works and empty promisesand I promise to lead a good Christian life.I will try to bring about the recognition of the truth of Godand your Church.Divine Heart of Jesus,I offer all my actionsthat every human heart may accept Your kingship.May the kingdom of Your peace be established across the world.Amen
I. WHAT IS THIS SACRAMENT CALLED?
1214 This sacrament is called Baptism, after the central rite by which it is carried out: to baptize (Greek baptizein) means to "plunge" or "immerse"; the "plunge" into the water symbolizes the catechumen's burial into Christ's death, from which he rises up by resurrection with him, as "a new creature."6

Father, you give us grace through sacramental signs,
which tell us of the wonders of your unseen power.In Baptism we use your gift of water,
which you have made a rich symbol
of the grace you give us in this sacrament.11

Do you not know that all of us who have been baptized into Christ Jesus were baptized into his death? We were buried therefore with him by baptism into death, so that as Christ was raised from the dead by the glory of the Father, we too might walk in newness of life.29