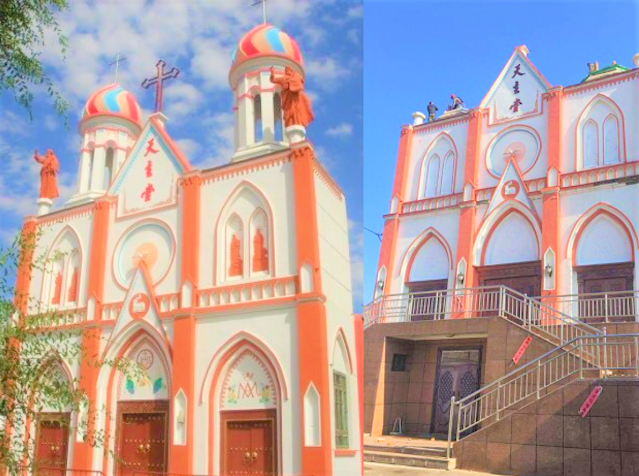 Asia News reports that Yining’s Sacred Heart church is set to be torn down.
The church was built in 2000, with all the permits and praise of the local authorities. There are two reasons for the destruction: the land’s commercial value and erasing the "showy" symbolism of the religious building. The policy of "sinicization" launched by Xi Jinping and implemented in Zhejiang and Xijiang. 16,000 mosques were also destroyed or damaged. The appeal to the Pope and the Vatican.


Yining (AsiaNews) - From today, 19 February, the Catholics of Yining (Xinjiang) must clear out everything of the Sacred Heart church. By order of the local authorities the church must be destroyed. "Perhaps – says one AsiaNews source - from next week this Catholic church on the western border of China will disappear into dust".
The community of Yining, in the Yili district, is located 700 km west of Urumqi, the capital of Xinjiang. The Catholics of the district - about 2 thousand - are made up of former exiles from the time of the Qing Empire and, after 1949 with the People's Republic of China, of immigrants and confined to forced labor camps in the region.
The strange fact is that the church is in possession of all of the nexessary permits from the Administration for Religious Affairs. Built in the year 2000, Yili district officials and Yining government authorities even attended its inauguration, praising the construction.
The authorities did not disclose the reason for the demolition. But most suspect that the church is being destroyed to use the land and build a commercial area in its place. In fact, the church stands along the road that leads to the airport and in the urban plans, this road will become increasingly important.
The point is that the place where the church stands was chosen in 1993 by the city government precisely because it was far from the inhabited centre and they did not want the church to be "too visible". But of course, over time, the city has grown and that land has now sparked the appetite of speculators and the local government.
In 2018 the church was already deeply scared: in the name of "sinicization" the Religious Affairs Office had erased the four bas-reliefs that adorned the facade, removed the two statues of St. Peter and St. Paul on the sides of the building, ripped the cross that adorned the cusp of the tympanum, the two domes and bell towers were destroyed because they were “too showy” .
Being "too showy" has haunted this church from the beginning. The project presented to the authorities in 1993 had to be reformulated and the size of the church reduced by 5 meters because it was "too high". During construction in 2000, the domes, painted in bright colours (photo 1 on the left), were deemed "too flashy" and repainted in grey (photo 2).
Faithful believe that the Regulations are being exploited with the intention to suffocate the life of Christians.
In the name of commercialization of land, at least four other churches have been destroyed in Xinjiang in recent years: that of Hami, that of Kuitun and two churches of Tacheng. All had permits, but they were demolished and no compensation was paid.
The priest of the Church of the Immaculate Conception in Tacheng was forcibly taken away and disappeared for almost two years. Now, although he has been released, he is not allowed to engage in any religious activity.
In recent years, many mosques have also been destroyed in the name of "sinicization". It is estimated that at least 16,000 mosques have been destroyed or damaged.
Edited from a report by Wang Zhicheng on Asia News