Pope Francis says "Music too can help biblical texts to "speak"...so that the divine Word can effectively reach minds and hearts." FULL TEXT to Musicians 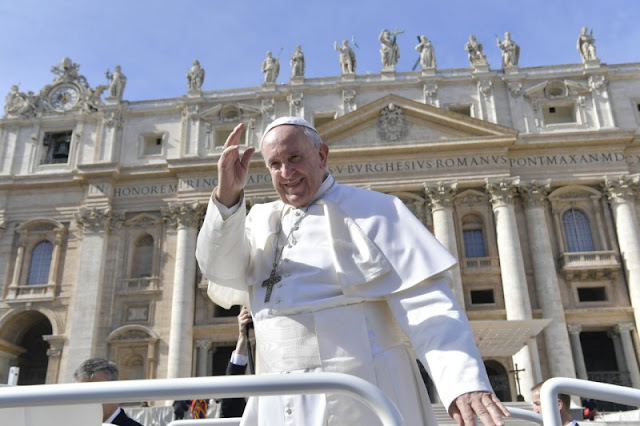 TO THE PARTICIPANTS IN THE 4th INTERNATIONAL CONVENTION ON MUSIC,
PROMOTED BY THE PONTIFICAL COUNCIL FOR CULTURE
[4-5 February 2021]

I hope that your reflections, which have as their theme "Texts and contexts", can enrich the ecclesial communities and those who work in the musical field, an area that is very important for the liturgy and evangelization.

In the book of the prophet Isaiah we find this exhortation:

As is well known, the Bible has inspired countless musical expressions, including fundamental pages in the history of music: let's think of Gregorian chant, Palestrina, Bach…; it has inspired a great variety of compositions on the five continents; and several contemporary authors have also dealt with sacred texts.

Many ecclesial communities, in recent decades, have been able to interpret these texts both by following the new musical forms and by enhancing the ancient heritage. The musical heritage of the Church, in fact, is very varied and can support, in addition to the liturgy, also the performance in concert, in school and in catechesis, and also in the theater.

We know, however, that since the beginning of the Covid pandemic, the activity in the music field has been greatly downsized. My thoughts go to all those who have been affected: to the musicians, who have seen their lives and their profession upset by the demands of distancing; to those who have lost their jobs and social contact; to those who have had to face the necessary moments of formation, education and community life in difficult contexts. Many have put significant effort into continuing to offer a new creative music service. It is a valid commitment not only for the Church, but also for the public horizon, for the "network" itself, for those who work in concert halls and in other places where music is at the service of the community.

I hope that this aspect of social life can also be reborn, that we return to singing and playing and to enjoy music and singing together. Miguel Cervantes in Don Quixote stated: " Donde hay música, no puede haber cosa mala " (Part II, c. 34): "Where there is music, there can be nothing bad". Many texts and compositions, through the power of music, stimulate the personal conscience of each one and also create a universal brotherhood.

The Prophet Isaiah, in that same passage, continued:

A good musician knows the value of silence, the value of pause. The alternation between sound and silence is fruitful and allows listening, which plays a fundamental role in any dialogue. Dear musicians, the common challenge is to listen to each other. In the liturgy we are invited to listen to the Word of God. The Word is our "text", the main text; the community our "context". The Word is a source of meaning, it illuminates and guides the journey of the community. We know how necessary it is to tell the story of salvation in idioms and languages ​​that can be well understood. Music too can help biblical texts to "speak" in new and different cultural contexts, so that the divine Word can effectively reach minds and hearts.

In your meeting you have chosen to pay attention to the most diverse musical forms: they express the variety of cultures and local communities, each with its own ethos . I am thinking particularly of indigenous civilizations, in which the approach to music is integrated with the other ritual elements of dance and celebration. In this context, engaging narratives in the service of evangelization can emerge. In fact, the integral experience of musical art also includes the dimension of corporeality. In popular tradition we often find a parallelism: “Feeling good is for singing well and singing well is for feeling good!”.

And I would like to conclude with a question, which comes spontaneously in the situation in which we find ourselves, caused by the pandemic: is the silence we live in empty or are we in the listening phase? Is it empty or are we listening? Will we later allow the emergence of a new song? The text and the context, now present in a new form, stimulate us to resume our journey together, because "the unity of hearts is deepened by the unity of voices" (Instruction Musicam sacram , 5). Voices, musical instruments and compositions continue to express, in the current context, the harmony of the voice of God, leading towards the "symphony", that is, universal brotherhood.

I entrust your commitment to God to sustain it and to make it fruitful. And I ask you all to pray for me. Good job. Thank you!