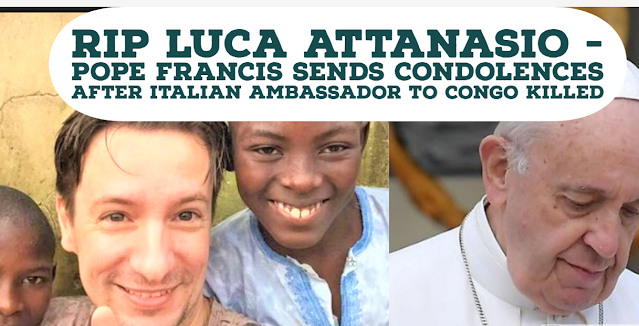 The Italian ambassador to the Democratic Republic of Congo has been killed in kidnapping attempt. Pope Francis sent condolences (see below)
The Italian Ambassador to the Democratic Republic of the Congo, Luca Attanasio, assassinated on February 22nd, 2021. He "was close to the missionary world working in the east of the country". The Italian policeman Vittorio Iacovacci and the Congolese driver Mustafa Milambo also died. This is what Monica Corna, head of the Salesian mission VIS (International Volunteering for Development) in the Democratic Republic of the Congo, who has worked alongside the Salesians for 18 years, reported in an interview with Agenzia Fides. "Luca Attanasio was well known to the missionary community of North Kivu - says Monica Corna. He was surely a very enthusiastic person who believed in what he was doing", stresses the volunteer. "
Ambassador Attanasio went to North Kivu to see firsthand the difficult situation of the local populations. For him, it was important to see a certain reality in order to have a direct vision and be a true witness".
Luca Attanasio,  believed that the Democratic Republic of Congo should have its rightful place among the nations".
Pope Francis sent a Telegram of Condolences To His Excellency
Hon. Sergio Mattarella, President of the Italian Republic:

With Pain I Learned About The Tragic Attack That Happened In The Democratic Republic Of Congo, Where The Young Italian Ambassador Luca Attanasio, The Thirty-year Carabiniere Vittorio Iacovacci And Their Congolese Authist Milhaus Lost Their Lives. I Express My Heartful Congratulation To Their Families, To The Diplomatic Service And To The Army Of The Carabinieri For The Disappearance Of These Servants Of Peace And Right. We Collect The Exemplary Testimony Of The Ambassador, A Person Of Excellent Human And Christian Qualities, Always Prodigue In Welding Fraternal And Cordial Relations, For The Restoration Of Serene And Agreement Relations Within That African Country; As Well As That Of The Carabiniere, Experienced And Generous In His Service And Near To Form A New Family. While I Early Prayer Of Suffrage For The Eternal Rest Of These Noble Children Of The Italian Nation, I Exhorted To Trust In The Providence Of God, In Whose Hands Nothing Is Lost Of The Good Performed, All The More When It Is Confirmed With Suffering. To You, Mr President, To The Relationships And Colleagues Of The Victims And To All Those Who Weep For This Mourning Send My Blessing From The Heart. Pope Francis Source: https://press.vatican.va/content/salastampa/it/bollettino/pubblico/2021/02/23/0113/00233.html

The ambush that led to the death of the three men took place yesterday morning, February 22, in the vicinity of the village of Kibumba, 3 km from Goma. The circumstances of the triple murder are still being assessed. (L.M.) (Edited form Agenzia Fides, 23/2/2021 and Vatican.va)