Saint February 12 : St. Saturninus & Companions : Bishop & Martyr who was Present in the Cenacle when the Holy Spirit descended at Pentecost 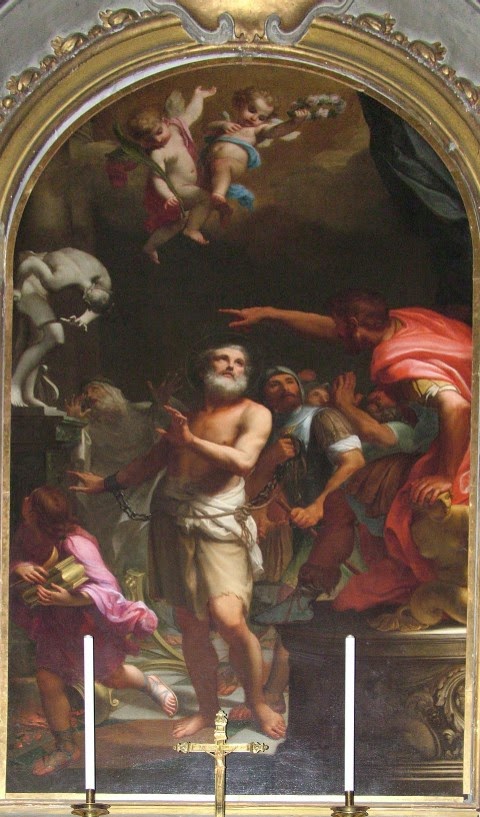 BISHOP, MARTYR Saint Saturninus was a contemporary and a disciple of Our Lord Jesus Christ; he came to Palestine from Greece, attracted by the reputation of Saint John the Baptist, which had echoed even to the northern Mediterranean region. He then followed our Saviour, heard His teaching, and was a witness to many of His miracles. He was present in the Cenacle when the Holy Spirit descended at Pentecost upon the Mother of Christ, the Apostles and Disciples assembled in the number of 120. (Acts of the Apostles 1:15) He departed to teach Christianity under Saint Peter's authority, evangelizing the lands east of Palestine, and going as far as the region of the Persians and Medes and their neighboring provinces. He cured the sick, the lepers, and the paralytics and delivered souls from the demons; and before he left, he gave written instructions to the new Christians concerning what they should believe and practice.
When Saint Saturninus went with Saint Peter to Rome, the Apostle was inspired to send out a number of fervent evangelists to the West, to dissipate by the light of Christ the darkness in which those regions were still plunged. Saturninus was directed to go to what is now southern France, to Toulouse in particular. Saint Peter consecrated him a bishop, that he might form and ordain native priests for the future Christian churches of Gaul. He was given for his companion Papulus, later to become Saint Papulus the Martyr.
The two companions acquired at Nimes an ardent assistant in the person of Honestus. At Carcassonne, when the three announced Christ they were thrown into a prison, where they suffered from hunger; but an Angel was sent by the Lord to deliver them, and they continued on their way to Toulouse, preaching the doctrine and the name of Christ publicly. At this large and opulent city, where idolatry was entrenched, the idols became mute when the missionaries arrived. This caused great astonishment, and the cause of the silence was sought. Saint Saturninus in the meantime was working miracles which produced a strong impression on the witnesses; among them, the cure of a woman with advanced leprosy. The sign of the cross which he made over crowds often cured many sick persons at the same time, and he then baptized those who showed themselves ready for the sacrament. For a time he left his two disciples there and continued on elsewhere, preaching in the cities of what are now Auch and Eauze. A Spaniard heard of him and crossed the Pyrenees to hear him; this man, by the name of Paternus, advanced so rapidly on the paths of virtue that Saint Saturninus ordained him and then established him bishop of Eauze. He himself returned to Toulouse and sent Honestus to Spain to preach. When the latter returned to ask him to come with him to Spain, he left his disciple Papulus in charge for a time at Toulouse.
At Pampeluna his preaching brought thousands to the truth, delivering these former idolaters from the heavy yoke of the ancient enemy. While he continued his apostolic labors elsewhere, in Toulouse a persecution broke out against Papulus, and the faithful Christian obtained the crown of martyrdom by a violent death. At once Saint Saturnin returned to Toulouse, when he learned of it.
The idols again became mute. One day a great multitude was gathered near a pagan altar, where a bull stood ready for the sacrifice. A man in the crowd pointed out Saturninus, who was passing by, as the cause of the silence. There is the one who preaches everywhere that our temples must be torn down, and who dares to call our gods devils! It is his presence that imposes silence on our oracles! He was chained and dragged to the summit of the capitol, situated on a high hill, and commanded to offer sacrifice to the idols and cease to preach Jesus Christ. An Angel appeared to him to fortify him, and the terrible flagellation he endured could not alter his firmness. I know only one God, the only true one; to Him alone I will offer sacrifice on the altar of my heart... How can I fear gods who you yourselves say are afraid of me? He was tied by a rope to the bull, which was driven down the stairs leading to the capitol. His skull was broken, and the Saint entered into the beatitude of the unceasing vision of God. His body was taken up and buried by two devout young women. Tradition conserved the memory of the place of his burial, where later a church was built.
Les Petits Bollandistes: Vies des Saints, by Msgr. Paul Guérin (Bloud et Barral: Paris, 1882), Vol. 13