Saint March 1 : St. David a Bishop and the Patron of Wales who Founded 12 Monasteries and was Known for Miracles 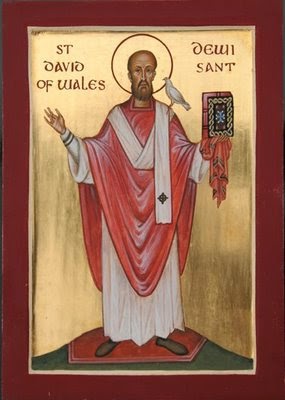 (DEGUI, DEWI). Bishop and Confessor, patron of Wales. He is usually represented standing on a little hill, with a dove on his shoulder. From time immemorial the Welsh have worn a leek on St. David's day, in memory of a battle against the Saxons, at which it is said they wore leeks in their hats, by St. David's advice, to distinguish them from their enemies. He is commemorated on 1 March. The earliest mention of St. David is found in a tenth-century manuscript Of the "Annales Cambriae", which assigns his death to A.D. 601. Many other writers, from Geoffrey of Monmouth down to Father Richard Stanton, hold that he died about 544, but their opinion is based solely on data given in various late "lives" of St. David, and there seems no good reason for setting aside the definite statement of the "Annales Cambriae", which is now generally accepted. Little else that can claim to be historical is known about St. David. The tradition that he was born at Henvynyw (Vetus-Menevia) in Cardiganshire is not improbable. He was prominent at the Synod of Brevi (Llandewi Brefi in Cardiganshire), which has been identified with the important Roman military station, Loventium. Shortly afterwards, in 569, he presided over another synod held at a place called Lucus Victoriae. He was Bishop (probably not Archbishop) of Menevia, the Roman port Menapia in Pembrokeshire, later known as St. David's, then the chief point of departure for Ireland. St. David was canonized by Pope Callistus II in the year 1120.
The first biography that has come down to us was written near the end of the eleventh century, about 500 years after the saint's death, by Rhygyfarch (Ricemarchus). According to these other writers St. David was the son of Sant or Sandde ab Ceredig ab Cunnedda, The saint's mother was Nonna, or Nonnita (sometimes called Melaria), a daughter of Gynyr of Caergawch. She was a nun who had been violated by Sant. St. David's birth  took place at "Old Menevia" somewhere about A.D. 454. Afterwards he spent ten years studying the Holy Scripture at Whitland in Carmarthenshire, under St. Paulinus (Pawl Hen), whom he cured of blindness by the sign of the cross. At the end of this period St. Paulinus, warned by an angel, sent out the young saint to evangelize the British. St. David journeyed throughout the West, founding or restoring twelve monasteries (among which occur the great names of Glastonbury, Bath, and Leominster), and finally settled in the Vale of Ross, where he and his monks lived a life of extreme austerity.  Here also his monks tried to poison him, but St. David, warned by St. Scuthyn, who crossed from Ireland in one night on the back of a sea-monster, blessed the poisoned bread and ate it without harm. From thence, with St. Teilo and St. Padarn, he set out for Jerusalem, where he was made bishop by the patriarch. Here too St. Dubric and St. Daniel found him, when they came to call him to the Synod of Brevi "against the Pelagians". St. David was with difficulty persuaded to accompany them; on his way he raised a widow's son to life, and at the synod preached so loudly, from the hill that miraculously rose under him, that all could hear him, and so eloquently that all the heretics were confounded. St. Dubric resigned the "Archbishopric of Caerleon", and St. David was appointed in his stead. One of his first acts was to hold, in the year 569, yet another synod called "Victory", against the Pelagians, of which the decrees were confirmed by the pope. With the permission of King Arthur he removed his see from Caerleon to Menevia, whence he governed the British Church for many years with great holiness and wisdom. He died at the great age of 147, on the day predicted by himself a week earlier. His body is said to have been translated to Glastonbury in the year 966. (Edited from Catholic Encyclopedia)
Prayer: O God, who graciously bestowed on your Bishop Saint David of Walesthe virtue of wisdom and the gift of eloquence, and made him an example of prayer and pastoral zeal; grant that, through his intercession, your Church may ever prosper and render you joyful praise. Through our Lord Jesus Christ, your Son,
who lives and reigns with you in the unity of the Holy Spirit,
one God, for ever and ever. Amen.