Bishop James Conley of Nebraska Reveals How St. Joseph and the Rosary Helped in Healing from Mental Health Issues 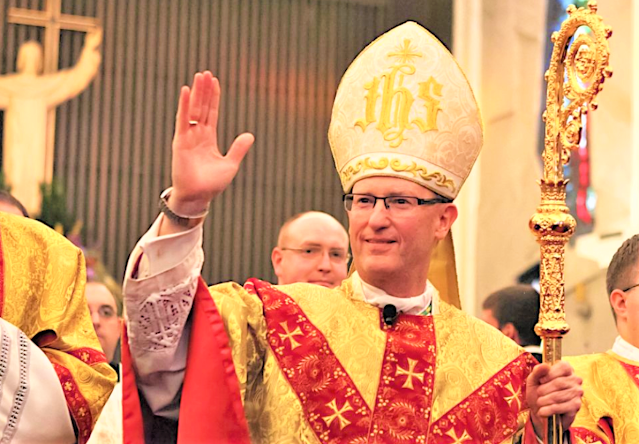 It wasn’t until several years after I had converted to the Catholic faith at the age of 20, that I discovered that my birthday fell on the Solemnity of St. Joseph, March 19. I was still learning more and more about the Catholic Church and about the saints; and I didn’t quite realize what a big deal it was to be born on St. Joseph’s day!

When I would tell one of my new Catholic friends that I was born on March 19th they would immediately say, “why didn’t your parents name you Joseph?” I would then explain to them that I was a convert and that nobody in my family knew that March 19 was a special day in the Catholic Church. When my parents eventually converted and, as a young priest, I had the privilege of baptizing, confirming and giving them their first holy communion, I told them, “you know, you should have named me Joseph!”

I have to confess that through the years, I never really had a super strong devotion to St. Joseph. I liked the idea that I was born on St. Joseph’s day and I knew that St. Joseph was an important saint in so many ways, but my devotion to him was off and on – until last year.

When I was away on medical leave last year in Phoenix, dealing with the challenges of anxiety and depression, I began to think more and more about St. Joseph. Through the generosity of Bishop Thomas Olmsted, bishop of Phoenix, I resided at a retreat house called Mount Claret. The retreat house had four residences for retired priests, and I was invited to stay in one. Just outside my window was a beautiful statue of St. Joseph in front of the residence next door. Every time I would walk out my door, I would pass by this statue of St. Joseph. I would always stop for moment and just look at the statue.

It was just about mid-March of last year that everything shut down because of the pandemic. Feelings of isolation and loneliness that I was already experiencing only got worse. It seemed like God was absent in my life. This was probably the darkest period of my life.

There was an image that helped me when I was going through some of my most difficult days. In the course of a month, the moon waxes and wanes. There are a few days in the lunar cycle when it’s impossible to see the moon with the naked eye. We know that it’s there, but we can’t see it. It is the same with God.

There were many days when I could not see, hear, feel or sense the presence of God. But somehow and some way, I knew that he was there, and that he had not completely abandoned me. Whenever we think that God has disappeared or abandoned us, think of the moon. It’s always there.

On my birthday, March 19 last year, I went to see my spiritual director, Father Eugene Mary, a young Phoenix priest who was released by Bishop Olmsted to be a diocesan hermit. He lives in a hermitage by himself in Black Canyon, a high desert mountain region about 45 minutes due north of Phoenix.

St. Joseph truly is our spiritual father. His strong masculine virtues as protector and guide, model for us men as to what it means to be man of God. His deep faith and trust in divine providence, particularly when the path ahead seems difficult, unclear and arduous, provided hope for me. I reflected many times on his journey to Egypt with Mary and the baby Jesus, and how much faith, trust and dependence upon God’s providence that must have taken. The virtue of perseverance was also a hallmark of St. Joseph, which was manifested during the arduous trip to Bethlehem and the strenuous flight to Egypt.

Although it would take many more months of healing before I would feel strong enough to return to Lincoln and my episcopal duties, St. Joseph played no small part in helping me regain my strength and my hope. When my mother’s health began to decline, I prayed to St. Joseph for her happy death, and he came through. I was able to anoint her and give her the apostolic pardon several times before she died.

In his Apostolic Letter, Patris Corde, Pope Francis proclaimed this year as a special Year of St. Joseph and has granted a Plenary Indulgence on special days:

“To reaffirm the universality of St. Joseph’s patronage over the Church, in addition to the aforementioned  occasions the Apostolic Penitentiary grants the Plenary Indulgence to the faithful who shall recite any prayer legitimately approved or act of piety in honour of St. Joseph, for example, ‘To you, O Blessed Joseph’, especially on the occasions of March 19 and May 1, on the Feast of the Holy Family of Jesus, Mary and Joseph, on the Sunday of Saint Joseph (according to the Byzantine tradition), on the 19th of every month, and every Wednesday, the day dedicated to the Saint’s memory, according to the Latin tradition.”

My mother passed away on the 19th of December.

On this upcoming Solemnity of St. Joseph March 19, I will consecrate the Diocese of Lincoln to St. Joseph, while celebrating the Confirmation Mass at St. Joseph Church in Lincoln. St. Joseph watched over and protected Jesus and the Blessed Virgin Mary during his time on earth. In consecrating the diocese to St. Joseph we ask him to intercede for us and protect us on our journey into everlasting life.