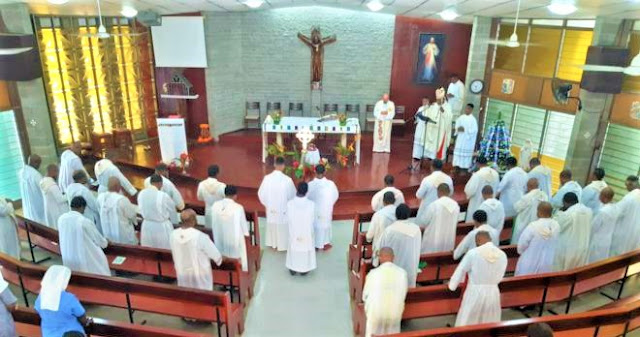 An attack on Diocesan house of Priests in Papua New Guinea in Oceania occurred on March 19, 2021.  "It was 2 am and, after a brief fight between fifty criminals and 5 local policemen, more than ten armed people entered the house of the diocesan priests where 11 of our priests and a deacon are staying". This is what Mgr. Rolando C. Santos, CM, Bishop of the diocese of Alotau-Sideia, wrote to Agenzia Fides, referring to an episode of violence that took place on March 19 at the John Sinou House. (excerpt from Agenzia Fides)

"After having broken the side door of the house they attacked 7 of our priests - says the Bishop -, they entered their rooms and stole their laptops, cell phones, cash and other valuables. They took away a new outboard motor, solar panels, projector and a TV. As a result of continuous blows to the head, a Filipino missionary lost a lot of blood. Taken to hospital, he is now in stable conditions. Another young local priest was stabbed, yet another was severely beaten up. The others were slightly injured. All are traumatized by this attack".

Statement of the Bishop of Alotau: March 19 Attack on John Sinou House
We are very much saddened and decry the violence and loss of property that happened in Alotau Town last 19th of March.
About 2:00 a.m., after a brief skirmish between around 50 rascals and 5 local policemen, about 12 of the rascals forced themselves inside the diocesan priests’ house where 11 of our priests and 1 deacon were staying. They broke the side door of the house which did not have iron grills. They assaulted 7 of our priests. They forced open their rooms and robbed them of their laptops, mobile phones, cash money and other valuables. They also carted away a new outboard motor, solar panels, projector and TV. A Filipino missionary lost a lot of blood after receiving continuous bashing on the head. He was confined in the hospital but is now in a stable condition. Another young local priest was stabbed, barely missing his heart. The face of another young local priest was swollen after being punched. The others sustained minor injuries. All were traumatized by the attack.
What led to this? More than a week ago, Tommy Baker’s second in command was reportedly shot dead by the police. Just before the attack at John Sinou House, it was reported that Tommy Baker’s group organized themselves and retaliated. They were heavily armed. One group started shooting at the police from the oval, another near the fire station, and a third group entered the priests’ house seizing the opportunity to steal while the police were distracted. There were many priests there because of the just concluded presbyteral council meeting and celebration of Chrism Mass.
Our priests and deacon are still traumatized by what happened. However, because of the coming Holy Week, they feel obliged to resume their pastoral duties, and go back to their parishes. The local people have expressed their sadness and anger over what happened to the priests. They are not happy about the growing deterioration of peace and order in Alotau and the rest of the province. They don’t feel safe and are living in fear. The Member for Alotau visited the priests the day after the incident but gave little or no assurance. We have not received any word from the provincial administration. The police look helpless because they are outnumbered by the rascals who are much better armed.
The Catholic Professionals Society of Alotau feel bad about what happened. The priests were not armed nor violent and are only there to serve the people. They don’t want this thing to happen again. They want things to change for the better for the good of the whole of Alotau and the province. They want a meeting with the police superintendent and issue a public statement.
There is need for a dialogue between the government, Tommy Baker’s group, the churches and the people at large on how to bring about peace and order in Alotau. Differences should be settling peacefully, and respect given to the rights and dignity of every person. Most of all we need to pray and beg God’s help and forgiveness. There is hope for a better tomorrow if we all act together and do what is expected of each one as we put our trust in God.
Bp Rolando Santos
Bishop of Alotau
Source: https://www.facebook.com/groups/157134551642036