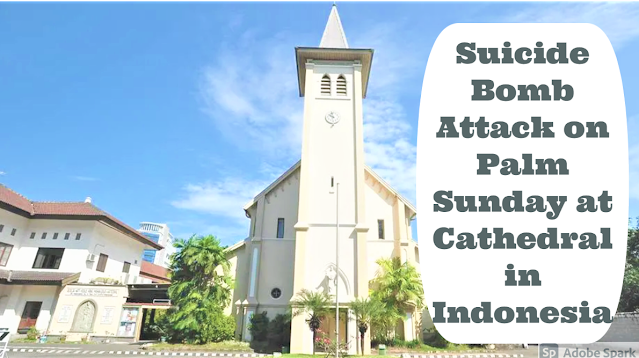 On Palm Sunday, March 28, 2021 a suicide bomb attack took place at the entrance to the Catholic cathedral in Makassar, Indonesia (South Sulawesi).
Asia News reports that police sources, said the incident occurred at the side entrance of the cathedral, dedicated to the Sacred Heart of Jesus, right at the end of the Palm Sunday Mass, when the faithful were still inside the building.
The attack created several injuries and chaos among the people who, in panic, tried to flee home as soon as possible. Human remains were found in the crime area, probably of the suicide bomber.
The incident occurred at 10.26 (local time; 9.26 Jakarta time).
The Archdiocese Curia spokeman, Fr. Frans Nipa Pr , released this statement:
1. The series of Palm Sunday celebrations, which was to be held from 12 until evening, is canceled.
2. The Archbishop of Makassar, Msgr. John Liku 'Ada, like all the priests who reside near the cathedral, are doing well.
3. Some faithful were injured by the blast and are now being treated in the local hospital.
4. The suicide attack took place near the side gate of the church, next to the medical dispensary of the cathedral.
Another priest, Fr. Wilhelmus Tulak Pr, said the bomber most likely tried to enter the church through the side gate, but he must have been stopped by the church security guards, who were keeping an eye on him. And all of a sudden the bomb went off.
Up to now there have been some injured, but no deaths, with the exception of perhaps the bomber himself.
Out of a population of about 12 million, the Archdiocese includes almost 200 thousand faithful (roughly 2%).