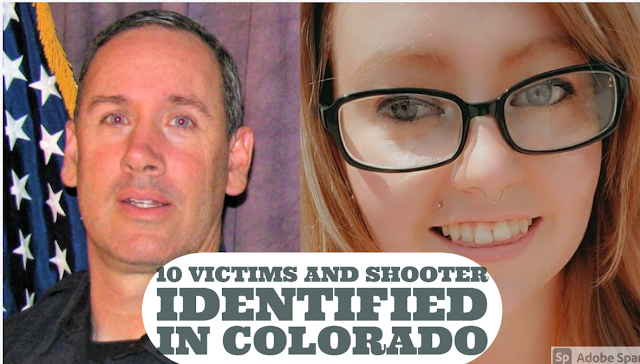 On March 22, 2021, there was a mass shooting at a supermarket in Boulder, Colorado, USA. 10 people were killed, and dozens of agencies continued to investigate the mass shooting at the King Soopers at 3600 Table Mesa Drive.
The Boulder County Coroner’s Office worked overnight to identify all of the victims and notify the next of kin.
The last victim was removed from the scene at 1:30 a.m. today (Tuesday, March 23).
By 2:02 a.m., all of the victims had been identified.
By 3:59 a.m., the families of the victims had been notified.
The names of the deceased are as follows:
Denny Stong, 20
Neven Stanisic, 23
Rikki Olds, 25 (picture above, who worked at the store and was attending college)
Tralona Bartkowiak, 49
Suzanne Fountain, 59
Teri Leiker, 51
Eric Talley, 51 (picture above - police officer)
Kevin Mahoney, 61
Lynn Murray, 62
Jody Waters, 65
“Our hearts go out to all of the victims killed during this senseless act of violence. We are committed to a thorough investigation and will bring justice to each of these families,” Police Chief Maris Herold said. “The Boulder community is strong and compassionate, and I know we will come together to take care of each other during this time.”
Detectives are asking anyone with any information about this crime to submit it online. You can also call the tipline at 1-800-CALL-FBI. For digital media, you can submit information at www.fbi.gov/bouldershooting.
The timeline is as follows:
*At approximately 2:40 p.m. on Monday, March 22, officers were dispatched to the King Soopers at 3600 Table Mesa Drive for a report of an active shooter
*Officers arrived on scene within minutes and immediately entered the store and engaged the suspect. There was an exchange of gunfire during which the suspect was shot. No other officers were injured. The suspect was then taken into custody at 3:28 p.m. He was transported to the hospital for treatment and is now in stable condition.

The suspect has been identified as Ahmad Al Aliwi Alissa, 21, of Arvada. He has been charged with 10 counts of murder in the first degree and will be transported to the Boulder County jail today.
Source: https://bouldercolorado.gov/newsroom/boulder-shooting-update-march-23-830-a-m
Images Source: FB Screenshots
Please Pray for the victims and their families.