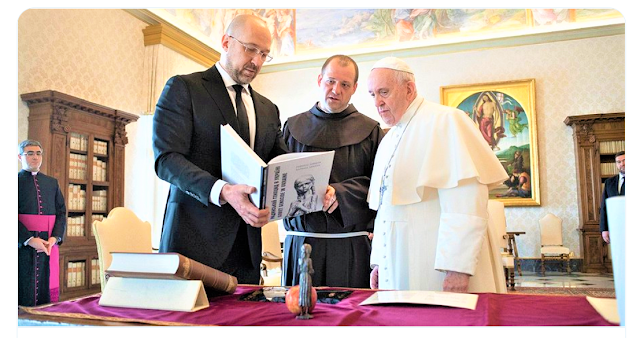 The Holy See released that on Thursday 25 March 2021, in the Vatican Apostolic Palace, the Holy Father Francis received in audience His Excellency Mr. Denys Shmyhal, Prime Minister of Ukraine, who subsequently met with His Eminence Cardinal Secretary of State Pietro Parolin, accompanied by His Excellency Archbishop Paul Richard Gallagher, Secretary for Relations with States.

“When I pray, I have the icon of Stanislav in front of me. It reminds me of Ukraine.”

When Pope Francis visited the Greek Catholic community of Ukraine in Rome two years ago, he told them that he had a devotion that kept him very close to them. Pope Francis explained said, every night before going to sleep, I kiss Our Lady of Tenderness that your major archbishop gave me. And I greet her in the morning too. So you could say I begin and end my day in Ukrainian.

At the beginning of the cordial discussions at the Secretariat of State, the parties focused on the good relations between the Holy See and Ukraine, with particular attention to some current matters of mutual interest, as well as various themes relating to the life and activity of the Catholic Church in the country. The parties then discussed extensively the health crisis and the dramatic situation in eastern Ukraine, with the hope that the recent ceasefire violations would give way to gestures promoting a peaceful resolution of the conflict.