Pope Francis says "I invite you, as Saint Alphonsus did, to go out to meet the fragile brothers and sisters of our society..." FULL TEXT 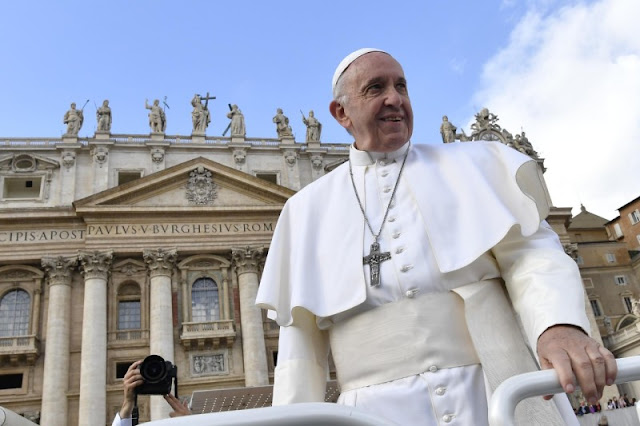 MESSAGE OF THE HOLY FATHER

One hundred and fifty years ago, Pius IX , on March 23, 1871, proclaimed Saint Alphonsus Maria de 'Liguori Doctor of the Church.

The Bull of proclamation of the doctorate of Saint Alphonsus highlights the specificity of his moral and spiritual proposal, having been able to indicate "the sure way in the tangle of conflicting opinions of rigorism and laxism" [1] .

One hundred and fifty years after this joyful anniversary, the message of St. Alphonsus Maria de 'Liguori, patron saint of confessors and moralists, and model for the whole Church outgoing missionary, still strongly indicates the high road to bring consciences closer to the face. welcoming of the Father, because "the salvation which God offers us is the work of his mercy" ( EG 112 ).

The Alphonsian theological proposal arises from listening to and welcoming the fragility of the most spiritually abandoned men and women. The Holy Doctor, formed in a rigorous moral mentality, converts to "kindness" by listening to reality.

The missionary experience in the existential peripheries of his time, the search for those far away and listening to confessions, the foundation and guidance of the nascent Congregation of the Most Holy Redeemer, and again the responsibilities as Bishop of a particular Church, lead him to become a father and teacher of mercy, certain that "God's paradise is the heart of man" [2] .

The gradual conversion towards a decidedly missionary pastoral care, capable of being close to the people, of knowing how to accompany the step, of concretely sharing their life even in the midst of great limitations and challenges, prompted Alphonsus to review, not without difficulty, also the theological approach. and juridical received in the years of his formation: initially marked by a certain rigorism, it was then transformed into a merciful approach, an evangelizing dynamism capable of acting by attraction.

In theological disputes, preferring reason to authority, he does not stop at the theoretical formulation of principles, but allows himself to be challenged by life itself. Advocate of the least, the fragile and the rejected by the society of his time, he defends the "right" of all, especially the most abandoned and the poor. This path led him to the decisive choice of placing himself at the service of consciences that seek, despite a thousand difficulties, the good to do, because they are faithful to God's call to holiness.

Sant'Alfonso, therefore, «is neither lax nor rigorist. He is a realist in the true Christian sense "because he well understood that" community life and commitment to others are at the very heart of the Gospel "( EG 177 ).

The proclamation of the Gospel in a rapidly changing society requires the courage to listen to reality, to "educate consciences to think differently, in discontinuity with the past" [3] .

Every pastoral action has its roots in the salvific encounter with the God of life, it is born from listening to life and is nourished by a theological reflection that knows how to take on people's questions in order to indicate viable paths. Following the example of Alphonsus, I invite moral theologians, missionaries and confessors to enter into a living relationship with the people of God, and to look at existence from their angle, to understand the real difficulties they encounter and to help heal the wounds, because only true fraternity "knows how to look at the sacred greatness of neighbor, who knows how to discover God in every human being, who knows how to bear the harassment of living together by clinging to the love of God, who knows how to open the heart to divine love in order to seek the happiness of others as their good Father seeks it "(EG, no. 92 ).

Faithful to the Gospel, Christian moral teaching called to proclaim, deepen and teach, should always be a response "to the God who loves us and who saves us, recognizing him in others and going out of himself to seek the good of all" ( EG, no. 39 ). Moral theology cannot reflect only on the formulation of principles and norms, but it needs to take on purposefully the reality that goes beyond any idea (cf. EG, n. 231 ). This is a priority (cf. EG, nn. 34-39) because the mere knowledge of theoretical principles, as Saint Alphonsus himself reminds us, is not enough to accompany and support consciences in the discernment of the good to be done. Knowledge must become practical by listening to and welcoming the least, the frail and those who are considered rejected by society.

Mature consciences for an adult church

Following the example of Saint Alphonsus Maria de 'Liguori, the renewal of moral theology [4], it becomes desirable and therefore necessary to accompany, accompany and support those most deprived of spiritual aid on the path towards redemption. The radicality of the Gospel should not be contrasted with the weakness of man. It is always necessary to find the path that does not distance but bring hearts closer to God, as Alphonsus did with his spiritual and moral teaching. All this because “the immense majority of the poor have a special openness to the faith; they need God and we cannot fail to offer them his friendship, his blessing, his Word, the celebration of the Sacraments and the proposal of a journey of growth and maturation in faith. The preferential option for the poor must mainly translate into a privileged and priority religious attention "( EG 200 ).

Like St. Alphonsus we are called to go out to meet the people as an apostolic community that follows the Redeemer among the abandoned. This reaching out to those without spiritual help helps to overcome individualistic ethics and to promote a moral maturity capable of choosing the true good. By forming responsible and merciful consciences, we will have an adult Church capable of constructively responding to social frailties, in view of the kingdom of heaven.

Going to meet the most fragile allows us to fight the "logic" of competitiveness and the law of the strongest "which" considers the human being in himself as a consumer good, which can be used and then thrown away "giving" beginning to the culture of waste "" (cf. EG, n. 53 ).

In recent times, the challenges that society is facing are innumerable: the pandemic and the work in the post-Covid world, the care to be ensured for all, the defense of life, the inputs that come to us from artificial intelligence, the safeguard of creation, the undemocratic threat and the urgency of brotherhood. Woe to us if in this evangelizing commitment, we separate the "cry of the poor"  [5] from the "cry of the earth" [6] .

Alfonso de 'Liguori, teacher and patron of confessors and moralists, offered constructive responses to the challenges of the society of his time, through popular evangelization, indicating a style of moral theology capable of holding together the need for the Gospel and the frailties human.

I invite you, following the example of the Holy Doctor, to seriously address on the level of moral theology "the cry of God who asks all of us:" Where is your brother? " ( Gen 4 : 9). Where is your slave brother? Where is what you are killing every day in the small clandestine factory, in the prostitution network, in the children you use for begging, in the one that has to work in secret because it has not been regularized? " ( EG, n. 211 ).

Faced with epochal passages such as the current one, the risk of absolutizing the rights of the strong, forgetting the most needy, is clearly evident.

The formation of consciences for good appears to be an indispensable goal for every Christian. Giving space to consciences - a place where the voice of God resounds - so that they can carry out their personal discernment in the concreteness of life (cf. AL 37) is a formative task to which we must remain faithful. The attitude of the Samaritan ( Lk 10 : 33-35), as I indicated in Brothers all , spurs us in this direction.

Moral theology must not be afraid to welcome the cry of the least of the earth and to make it its own. The dignity of the frail is a moral duty that cannot be evaded or delegated. It is necessary to testify that law always means solidarity.

I invite you, as Saint Alphonsus did, to go out to meet the fragile brothers and sisters of our society. This involves the development of a moral theological reflection and pastoral action, capable of committing oneself to the common good which has its roots in the proclamation of the kerygma , which has a decisive word in defense of life, towards creation and brotherhood.

On this special occasion I encourage the Congregation of the Most Holy Redeemer and the Pontifical Alphonsian Academy, as its expression and center of high theological and apostolic formation, to engage in constructive dialogue with all the requests coming from every culture [7] , to seek apostolic answers, moral and spiritual in favor of human frailty, knowing that dialogue is marturya .

Posted by Jesus Caritas Est at 9:48 AM