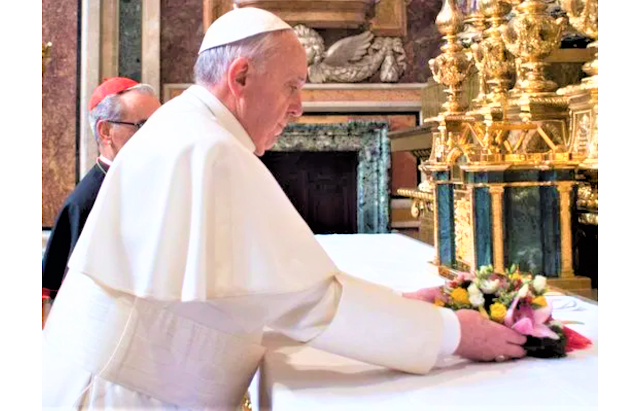 Pope Francis thanked Our Lady after his safe return from his visit to Iraq. As is his tradition, before and after trips, the Pope made a brief visit to the Basilica of St. Mary Major to thank the Blessed Virgin Mary for her protection during his visit to Iraq. Pope Francis returned to Rome on Monday, March 8th, 2021. He expressed his gratitude to Our Lady for her maternal protection. The Pope paused in prayer before the image of Maria Salus Populi Romani. This ancient Roman icon is located in the Borghese chapel at the Basilica of St. Mary Major. Pope Francis brought a bouquet of flowers from Iraq, which he placed on the altar at the foot of Our Lady’s image. According to the Holy See Press Office, he thanked the Virgin Mary for her protection, which he had asked for before he left for Iraq.
It was also noted that Pope Francis revealed (on the plane) he plans to travel to Hungary for the Eucharistic Congress in September.
Edited from Vatican News
Posted by Jesus Caritas Est at 8:49 PM