Bishops Release Statement after Trial of Officer Chauvin for the Death of Georg Floyd "To heal the wound of racism, we must open our hearts to allow God’s amazing grace..." FULL TEXT 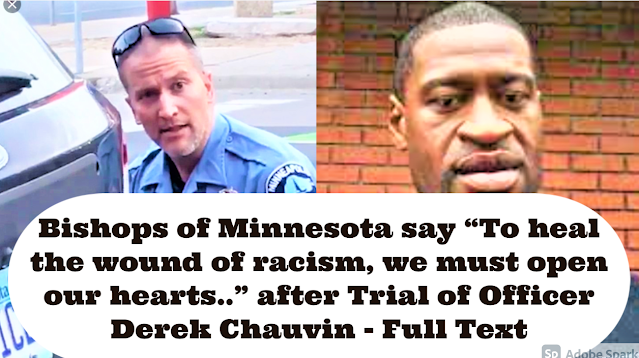 On Tuesday, April 20, 2021, after a hearing, Minneapolis police Officer Derek Chauvin was convicted of murder and manslaughter in the death of George Floyd. George Perry Floyd Jr. was an African-American man killed during an arrest after passing a counterfeit $20 bill in Minneapolis in a store. Derek Chauvin, one of four police officers who arrived on the scene, knelt on Floyd's neck and back for 9 minutes and 29 seconds.
Floyd's death sparked worldwide protests, violence and a reexamination of racism.   In the, Hennepin County Government Center,  in Minneapolis a jury of six white people and six Black or multiracial people came back with its verdict after about 10 hours of deliberations over two days. Chauvin was found guilty on all charges: second-degree unintentional murder, third-degree murder and second-degree manslaughter. His bail was immediately revoked and sentencing will be in two months. Archbishop Bernard Hebda of Minneapolis held a special Mass for peace and his homily can be heard on the video below. The Minnesota Bishops also released a statement:
Statement of the Minnesota Catholic Conference at the Close of the Trial of Derek Chauvin
The trial of Derek Chauvin, the former Minneapolis police officer accused of killing George Floyd last Spring, has reopened questions throughout Minnesota about the impact of racism in our society and culture. As leaders of the Catholic dioceses of our State—pastors of multi-racial, multi-cultural flocks from all walks of life—we acutely feel the anxieties in our communities, along with a thirst for justice and a longing for a path to a more peaceful life together as sons and daughters of God.
As the U.S. bishops noted in a 2018 pastoral letter on racism, Open Wide Our Hearts: The Enduring Call to Love, it is a sad and undeniable truth that racial prejudice and discrimination continue to impact the lives and livelihoods of millions of U.S. citizens.
There is far too much evidence that prejudice has an impact in criminal justice matters, influencing not only the way individuals are treated by some police and court systems but also the rates of incarceration. Whatever the verdict may be in the Chauvin trial, the Church remains committed to providing long-term leadership in eradicating structures of sin and racism in Minnesota and beyond.
In our ongoing thirst for righteousness, however, we know that we cannot permit anger or hatred to prevail. The violent protests of these past months across our country have done very little to improve the lives of people of color living in intergenerational poverty or to address their basic needs for good schools and safer neighborhoods for their children, access to capital to start businesses, better social services, and support for marriages and families.
We wish to hold up before all peoples the image of the Crucified Christ. Jesus Christ gave his life to bring eternal justice, reconciliation, and salvation to all peoples. He is before us as a witness, because he is fully God and fully man, to the healing power of forgiveness, compassion, reconciliation, and peace. He teaches us that our own personal and communal violence and destruction will not bring healing. Rather, following the example of great leaders like the Reverend Dr. Martin Luther King, Jr., who imitated Jesus through non-violence, we seek to make a gift of our lives for peace and justice for all peoples.
To heal the wound of racism, we must open our hearts to allow God’s amazing grace to be the light that fills us and the light that we share with our neighbors. As a diverse community, the Catholic Church is committed to changing hearts and minds and to moving the conversation about race in this country beyond accusations and recriminations toward practical, nonviolent solutions to the everyday problems that are encountered in these communities. We will continue to do this through teaching the truth of human dignity, offering charity to our neighbors of every race, and advocating for those who are most vulnerable.
In the interests of true and lasting social justice, however, the Church must challenge assertions that the United States is “fundamentally” racist. The truth is that, although we have much further to go, the nation has made great strides in addressing historic evils and wrongdoing. To deny or distort the truth about our history and the goals set and achieved, particularly by black Americans, misrepresents the past and dishonors their sacrifices while also rhetorically disenfranchising and disempowering the heirs to the fruit of their efforts who are currently engaged in restorative justice efforts.
The Catholic Church in Minnesota invites all people of faith to come together to speak with one another in a civil and charitable manner. Let us pray with one another and for one another. Let us respect one another as children of God, created in his image. Let us collectively confess the truth and recognize that we urgently need each other now to get out of these cycles of fear and violence. We must collectively call upon our Maker to bring the compassion, reconciliation, forgiveness, and peace that only he can provide. We commit ourselves in our communities and in our apostolates to be a place of reconciliation and racial justice. We will foster a justice rooted in our common identity as children of God.
There are no victims and no oppressors in the Kingdom of God. For our children’s sake, let us embrace our true identity, without waiting another day.
Yours in Christ,
Most Rev. Bernard A. Hebda, Archbishop of the Archdiocese of St. Paul and Minneapolis
Most Rev. Andrew H. Cozzens, Auxiliary Bishop of the Archdiocese of St. Paul and Minneapolis
Most Rev. John M. Quinn, Bishop of the Diocese of Winona-Rochester
Most Rev. Donald J. Kettler, Bishop of the Diocese of St. Cloud
Most Rev. Richard E. Pates, Apostolic Administrator of the Diocese of Crookston
Very Rev. James B. Bissonette, Diocesan Administrator of the Diocese of Duluth
Very Rev. Douglas L. Grams, Diocesan Administrator of the Diocese of New Ulm
Source: https://www.mncatholic.org/statement-of-the-minnesota-catholic-conference-at-the-close-of-the-trial-of-derek-chauvin/