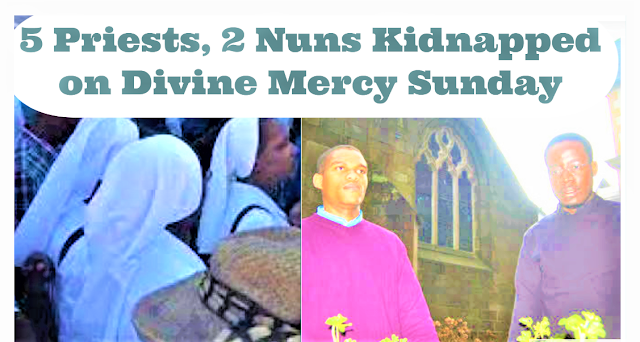 On the second Sunday of Easter, while the universal Church celebrated Divine Mercy, the Catholic Church of Haiti, in particular the Society of Priests of Saint Jacques and the Archdiocese of Cap Haitien, lamented the kidnapping of 5 of their priests, two nuns and 3 relatives of Father Jean Arnel Joseph. The kidnapping took place yesterday, Sunday, April 11, in the town of Croix-des-Bouquets, near the capital Port-au-Prince. Father Stevenson Montinard, priest of Saint Jacques, confirmed the news to Fides source and asked for prayers for the release of Fathers: Michel Briand (of French nationality), Jean Nicaisse Milien, Joël Thomas, Evens Joseph, and Jean-Hugues Baptiste ( priest of the Archdiocese of Cape Haitian, medical student) and Sister Agnès Bordeau, of the Congregation of Providence of Pommeraye, of French nationality, and of Sister Anne Marie Dorcelus, of the Congregation of the Little Sisters of the Child Jesus.

The victims were kidnapped on their way to the parish of Galette Chambon. According to Father Stevenson Montinard, the kidnappers demand a large sum of money for the release of the kidnapped.

Unfortunately, kidnapping cases occur daily in the country, which for years has faced a growing wave of insecurity. "This new case is a reflection of the collapse of the security apparatus of the State and the country. No one seems to be safe anymore", Fr. Renold Antoine, C.Ss.R, who works on the spot, told Fides. "Outlawed groups continue to sow fear and sadness in the hearts of the population", concluded Father Renold.

Police suspect that an armed gang active in the area, nicknamed "400 Mawozo", is behind the kidnapping, according to a local source. The Conference of Haitian Religious (CHR) reported in a statement that three other people were also kidnapped, relatives of another priest who initially were not considered in the number of those kidnapped. "The CHR expresses its deep regret but also its anger at the inhumane situation we have been going through for more than a decade", reads the statement.

Gang violence and political instability in the country have recently led to demonstrations on the streets of the capital (see Fides, 10/3/2021). Haiti, the poorest country on the American continent, has long been plunged into a profound political crisis. President Jovenel Moïse believes that his term will expire on February 7, 2022, while for the opposition and part of civil society it ended on February 7, 2021. This disagreement is due to the fact that Moise was elected in a vote canceled for fraud, then re-elected a year later. (CE) (Source: Agenzia Fides, 12/4/2021)

Unknown said…
LORD SAVE YOUR PEOPLE