How Long is Easter? A Great 50 Days! - What You Need to know about Easter and Pentecost to SHARE! 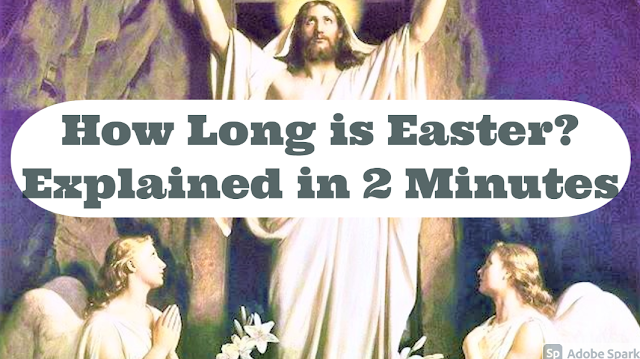 The Easter Vigil is the "Mother of All Vigils."Easter Sunday, then, is the greatest of all Sundays, and Easter Time is the most important of all liturgical times.Easter is the celebration of the Lord's resurrection from the dead, culminating in his Ascension to the Father and sending of the Holy Spirit upon the Church.There are 50 days of Easter from the first Sunday to Pentecost.It is characterized, above all, by the joy of glorified life and the victory over death, expressed most fully in the great resounding cry of the Christian:Alleluia! (IMAGE SHARE GOOGLE)
All faith flows from faith in the resurrection:"If Christ has not been raised, then empty is our preaching; empty, too, is your faith." (1 Cor 15:14)

"What you sow is not brought to life unless it dies. And what you sow is not the body that is to be, but a bare kernel of wheat, perhaps, or of some other kind;…So also is the resurrection of the dead. It is sown corruptible; it is raised incorruptible. It is sown dishonorable; it is raised glorious. It is sown weak; it is raised powerful. It is sown a natural body; it is raised a spiritual body. If there is a natural body, there is also a spiritual one. So, too, it is written, "The first man, Adam, became a living being," the last Adam a life-giving spirit. But the spiritual was not first; rather the natural and then the spiritual. The first man was from the earth, earthly; the second man, from heaven. As was the earthly one, so also are the earthly, and as is the heavenly one, so also are the heavenly. Just as we have borne the image of the earthly one, we shall also bear the image of the heavenly one (1 Cor 15:36-37, 42-49)..

Easter culminates in Pentecost, wherein the gift of the Spirit brings Christ's victory to the members of his Body, the Church.With the gift of the Spirit, we begin, already now, to share in Christ's rising from the dead.It is this faith which brings peace and hope to troubled hearts in a troubled world.The faith of Easter does not mean there will no longer be evils in this world, but rather that the evils of this world are no longer the final word.Suffering has not been removed, but filled with the presence of the Lord, who inspires hope, endurance and above all, love.
The octave of Easter comprises the eight days which stretch from the first to the second Sunday.It is a way of prolonging the joy of the initial day.In a sense, every day of the Octave is like a little Sunday.
The word "Easter" comes from Old English, meaning simply the "East."The sun which rises in the East, bringing light, warmth and hope, is a symbol for the Christian of the rising Christ, who is the true Light of the world.The Paschal Candle is a central symbol of this divine light, which is Christ.It is kept near the ambo throughout Easter Time, and lit for all liturgical celebrations.

From Universal Norms on the Liturgical Year and the Calendar:

22. The fifty days from the Sunday of the Resurrection to Pentecost Sunday are celebrated in joy and exultation as one feast day, indeed as one "great Sunday." These are the days above all others in which the Alleluia is sung.
23. The Sundays of this time of year are considered to be Sundays of Easter and are called, after Easter Sunday itself, the Second, Third, Fourth, Fifth, Sixth, and Seventh Sundays of Easter. This sacred period of fifty days concludes with Pentecost Sunday.
24. The first eight days of Easter Time constitute the Octave of Easter and are celebrated as Solemnities of the Lord.
25. On the fortieth day after Easter the Ascension of the Lord is celebrated, except where, not being observed as a Holyday of Obligation, it has been assigned to the Seventh Sunday of Easter (cf. no. 7).
26. The weekdays from the Ascension up to and including the Saturday before Pentecost prepare for the coming of the Holy Spirit, the Paraclete.

The liturgical color for Easter is white.  The General Instruction of the Roman Missal(no. 346) also states: "On more solemn days, festive, that is, more precious, sacred vestments may be used even if not of the color of the day. The colors gold or silver may be worn on more solemn occasions in the Dioceses of the United States of America."
Especially during Easter Time, instead of the customary Penitential Act, the blessing and sprinkling of water may take place as a reminder of Baptism.
There are six metropolitan sees and their suffragan Dioceses which maintain the Solemnity of the Ascension on Thursday:Boston, Hartford, Newark, New York, Omaha, and Philadelphia.Every other region of the United States has opted to transfer the Solemnity to the following Sunday (the Seventh Sunday of Easter). Text Source USCCB