Pope Francis Receives Filippo Grandi, the UN High Commissioner for Refugees, who said “Pope Francis is the voice of the most marginalized people..." VIDEO 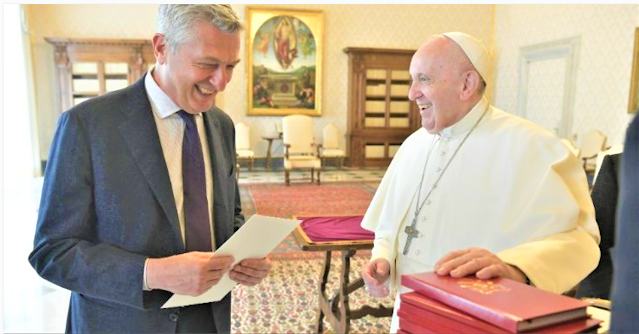 Pope Francis on Friday, April 16, 2021, received in audience the United Nations High Commissioner for Refugees (UNHCR), Filippo Grandi, and discussed migration and refugee issues.
Pope Francis said "Thank you for what you do." Filippo answered, "Thank you for having me. Thank you for what you say and what you do. Without you we also would not be able to do our work." Filippo Grandi is the head of the UN Refugee Agency. He held several meetings in Rome with authorities about refugees.
The UN Refugee Agency is often in communication with the Migrants and Refugees Section of the Holy See, established by the Pope. (Romereports)
United Nations High Commissioner for Refugees Filippo Grandi praised Pope Francis’ holistic approach to global displacement and the needs of the most vulnerable, including those forced to flee their homes, as expressed in the encyclical letter Fratelli Tutti, during a private Audience at the Holy See today.

Pope Francis is one of the greatest champions of the cause of refugees and migrants.

In a world which risks leaving too many behind, I went to see him today seeking strength and vision, and I left him determined and inspired to continue our work for those in need.@Pontifex pic.twitter.com/EHbbKWG4rU

The High Commissioner highlighted the importance of strengthening cooperation between the Holy See and UNHCR, the UN Refugee Agency, in welcoming, protecting and integrating asylum-seekers and refugees during his visit to the Vatican City.
His Holiness, handing over to the High Commissioner a signed copy of his message for the celebration of the 54th World Day of Peace, shared his concern over the extent of global humanitarian emergencies. More than 80 million people are forced to flee conflict, persecution and violence, with the poorest countries bearing the brunt of the world’s refugee crisis.
“Pope Francis is the voice of the most marginalized people: refugees, the forcibly displaced and migrants”, Grandi said. “His tireless commitment has made a concrete difference in the response to those who are fleeing major humanitarian crises, by providing a safe place and effective assistance for integrating the most vulnerable in receiving countries”, he added.
UNHCR is looking forward to extending its existing partnership with the Vatican in line with the objectives of the Global Compact on Refugees, which aims at sharing responsibility with those countries hosting and supporting the largest numbers of displaced people.
The Pope has repeatedly denounced these problems and supported refugees and persecuted people throughout the world.
In February 2016 he visited the border between Mexico and the United States. In April of that same year he traveled to a refugee camp in Greece and brought several of its residents to Italy. He then met with a group of Rohingya Muslims in Bangladesh in 2017.
Press Release: https://www.unhcr.org/news/press/2021/4/6079a4f64/unhcrs-grandi-pope-francis-share-vision-global-response-displacement-based.html