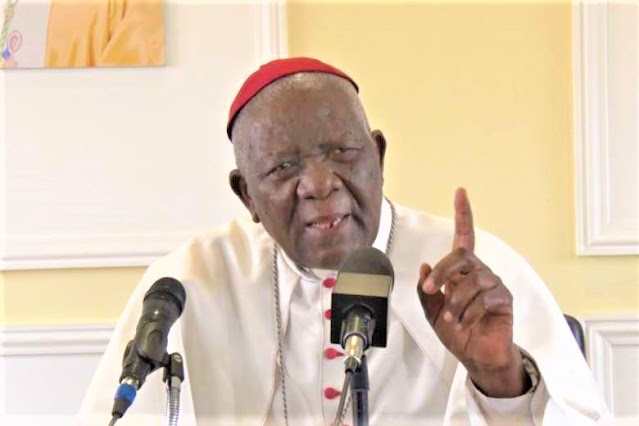 In Cameroon, Catholic Cardinal Christian Wiyghan Tumi, a well known advocate for peace in the  Anglophone separatist crisis in the country, died. The 90-year-old cardinal was abducted for 24 hours by the separatist fighters in November for asking them to disarm. Cardinal Tumi died in the coastal city of Douala on Saturday.He was kidnapped by Anglophone separatist fighters in Cameroon's Northwest region in November and released after 24 hours. Separatists claimed responsibility for the abduction on social media. They said they were angry over the cardinal's suggestion that fighters should disarm and work toward a peace.
Cardinal Christian Wiyghan Tumi, Archbishop emeritus of Douala (Cameroon), was born on 15 October 1930 in Kikaikelaki, Cameroon. He did his secondary studies at diocesan seminaries and at the seminaries of Ibadan, Bodija and Enugu in Nigeria. From 1969 to 1973 he obtained in Nigeria a Teachers’ Training Grade; a University General Certificate of Education at Ordinary Level in London; a licentiate in theology at the Catholic Faculty of Lyon; a doctorate in philosophy at the Catholic University of Fribourg, Switzerland. He is well versed in his native dialect, Nso, Pidgin and Hausa, Latin, English, and French.
He was ordained a priest on 17 April 1966 in Soppo, diocese of Buéa and from 1966 to 1967 carried out his ministry as a parochial vicar at Fiango (Kumbo). From 1967 to 1969 he was a professor at the Bishop Rogan College minor seminary. In 1973, after having studied abroad, he returned to his diocese and was named rector of the major regional seminary of Bambui, archdiocese of Bamenda. He was also chaplain to the Association of Catholic Dames and was very involved in promoting the ecumenical movement, obtaining much esteem by Presbyterians and Baptists.
President of the presbyteral diocesan council, on 6 December 1979 he was elected the first bishop of the diocese of Yagoua, erected the same day. He received episcopal ordination on 6 January 1980 in St. Peter’s Basilica. During his pastoral care, the local church developed rapidly, enriched with institutions and centers of formation, nursery schools and dispensaries.
Elected on 23 April 1982 vice-president of the Episcopal Conference, on 19 November 1982 he was promoted to Coadjutor Archbishop of Garoua. On 17 March 1984 he was made Archbishop.
In 1985 he was elected as president of the National Episcopal Conference of Cameroon (until 1991). President of the Symposium of Episcopal Conferences of Africa and Madagascar (SECAM), 1990 - 1994.
He participated in the 6th General Assembly of the Synod of Bishops (1983) and in the extraordinary assembly of the Synod of Bishops of 1985. President delegate to the 8th General Assembly of the Synod of Bishops (1990); President delegate to the Special Assembly for Africa of the Synod of Bishops (1994). He participated in the Second Special Assembly for Africa of the Synod of Bishops (October 2009).
Archbishop of Douala, 31 August 1991 - 17 November 2009.
He participated in the conclave of April 2005, which elected Pope Benedict XVI.
Created and proclaimed Cardinal by St. John Paul II in the Consistory of 28 June 1988, of the Title of Ss. Martiri dell'Uganda a Poggio Ameno (Martyrs of Uganda at Poggio Ameno).
Cardinal Christian Wiyghan Tumi died on 2 April 2021.