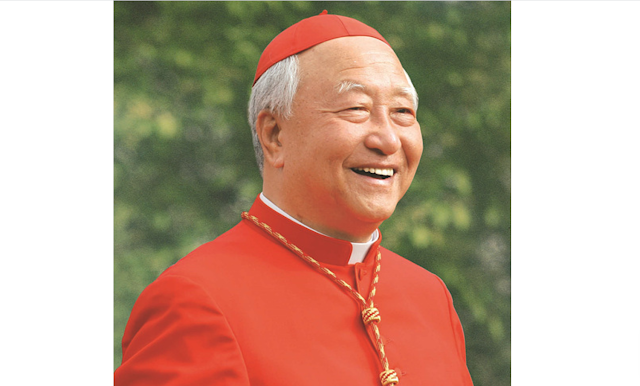 Press Release: The Passing of H. E. Cardinal Nicholas CHEONG Jin-suk
H. E. Cardinal Nicholas CHEONG Jin-suk, Archbishop Emeritus of Seoul, passed away on April 27, 2021.
His Eminence served as the President of the Catholic Bishops’ Conference of Korea from 1996 to 1999 and was created as Cardinal in March, 2006. He devoted himself to research of the Canon Law and its application to the Catholic Church in Korea. After his resignation as the Archbishop of Seoul, he concentrated on his writing activities.
The funeral Mass will be dedicated at Myeongdong Catholic Cathedral, Archdiocese of Seoul at 10:00 a.m. on Saturday, May 1, 2021.

Source: Catholic Bishops Conference of South Korea - https://cbck.or.kr/en/News/20210382 ]
Biography of Cardinal Nicholas CHEONG JINSUK from Vatican.va
Cardinal Nicholas Cheong Jinsuk, Archbishop emeritus of Seoul (Korea), was born on 7 December 1931 in Supyo Dong, South Korea. He was ordained a priest on 18 March 1961.
Cardinal Cheong Jinsuk served as parochial cooperator and as teacher and vice-president of Song Shin High School. He was appointed secretary to the Archbishop of Seoul and chancellor, and was very involved in many activities at the archdiocesan level.
After having obtained a degree in canon law from the Pontifical Urban University, he returned to Korea and on 25 June 1970 he was nominated Bishop of Cheongju and received episcopal ordination on 3 October of the same year.
From 1975 until 1999 he was member of the executive committee of the Korean Bishops’ Conference and from 1983 until 2006 he was president of the Committee for Canonical Affairs.
From 1996 until 1999 he was president of the Korean Bishop’s Conference.
Ever since his ordination to the priesthood, Cardinal Cheong Jinsuk has always sought to increase the number of Korean Catholic faithful, who are a minority of the population. His aim is to reach 20 percent by 2020.
On 3 April 1998 he was appointed Archbishop of Seoul and on 6 June of the same year Apostolic Administrator of the diocese of P’yŏng-yang.
Has taken part in the Special Assembly for Asia of the Synod of Bishops, 1998.
Has taken part also in the Council of Cardinals for the Study of Organizational and Economic Affairs of the Holy See.
Archbishop emeritus of Seoul from 10 May 2012.
Created and proclaimed cardinal by Benedict XVI in the consistory of 24 March 2006, of the Title of Santa Maria Immacolata di Lourdes a Boccea (Mary Immaculate of Lourdes at Boccea).
Cardinal Nicholas Cheong Jinsuk died on 27 April 2021.