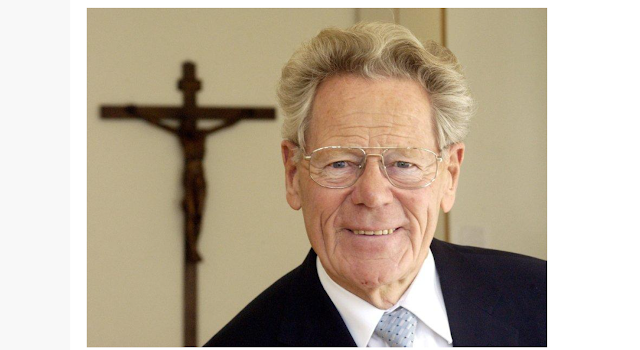 Küng studied theology and philosophy at the Pontifical Gregorian University in Rome and was ordained a priest in 1954. He then continued his education in various European cities, including the Sorbonne in Paris. His doctoral thesis was entitled Justification: Doctrines of Karl Barth and a Catholic Reflection.

In 1960 Küng was appointed professor of theology at Eberhard Karls University, Tübingen, Germany. He was a colleague Joseph Ratzinger (later Pope Benedict XVI). In 1962 he was appointed peritus by Pope John XXIII, serving as an expert theological advisor to members of the Second Vatican Council until its conclusion in 1965.

In the late 1960s Küng rejected the doctrine of papal infallibility, in particular with his book Infallible? An Inquiry (1971). Due to this, on December 18, 1979, he was stripped of his license to teach as a Roman Catholic theologian. He continued to teach, however, as a tenured professor of ecumenical theology at the University of Tübingen until his retirement (Emeritierung) in 1996. He was never excommunicated and remained a Roman Catholic priest until his death.

His book — Christ sein (On Being a Christian) appeared in 1974 and quickly sold more than 200,000 hard covers in German alone. He met with Britain's Prime Minister Tony Blair, former Russian President Mikhail Gorbachev, Germany's Helmut Schmidt, and John F. Kennedy. He even appeared on the American talk show "The Phil Donahue Show".

In the early 1990s Küng initiated a project called Weltethos (Global Ethic), which is an attempt at describing what the world religions have in common (rather than what separates them). His vision of a global ethic was contained in the document, Towards a Global Ethic: An Initial Declaration. This Declaration was signed at the 1993 Parliament of the World's Religions by many religious and spiritual leaders from around the world. Later Küng's project would culminate into the UN's "Dialogue among Civilizations" to which Küng was assigned as one of 19 "Eminent Persons".

Kung had Parkinson's disease, macular degeneration and arthritis since 2013, and died April 6 at his home in Tubingen, Germany at the age of 93.