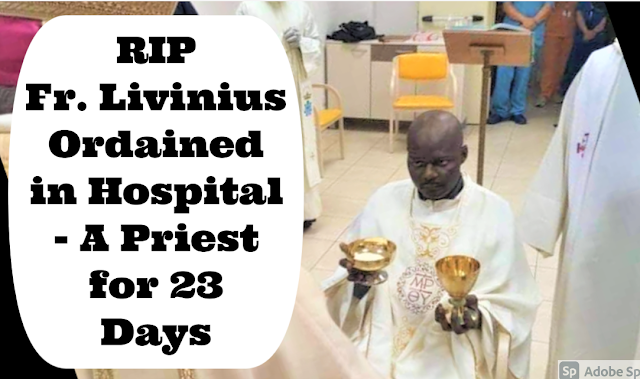 The newly ordained, Fr. Livinius Esomchi Nnamani, has died. Pope Francis approved his early ordination, as a seminarian sick with Leukemia in hospital.

The young Nigerian religious, Livinius Nnamani, was ordained a priest on April 1st, 2021, in Rome, after the Pope gave his approval for his early ordination.

The 31-year-old had written to the Holy Father requesting to move forward his ordination, and was granted his wish. Bishop Daniele Libanori, an Auxiliary bishop of Rome, ordained Livinius a priest at the Presidio Sanitario Medica Group Casilino Hospital in Rome.

Recently-ordained Fr. Livinius began his vocation journey in Owerri, Imo state, in Southeastern Nigeria, when he entered the Order of the Mater Dei, at age 20.

Shortly after his first vows, Livinius was diagnosed with Leukemia, begining a period of therapies and treatments for the young religious. Two years ago, he was sent to Italy in search of better healthcare and to continue his studies.

Despite the transfusions and treatments, Livinius continued his studies at the Pontifical University of Saint Thomas Aquinas, better known as the Angelicum, and pronounced his final vows last September.

Livinius made the decision to write to Pope Francis, asking him to bring forward his ordination. The reply came quickly on the 31st of March: Pope Francis gave his permission. The following day, Livinius was ordained a priest.

“With this gift,” Bishop Libanori said during his homily, “God the Father wants to sustain you so that you can fully live the trial to which he called you.”

“As a priest, you will be joined with Jesus to make your body an offering pleasing to God. Our priesthood, indeed, reaches its peak when together with the bread and wine, we know how to offer all of ourselves, the things the Lord has given us, and our very lives.”

Fr. Livinius has began his priestly ministry at the Casilino hospital, where he gave his blessing to the doctors and nurses who care for him and other patients on a daily basis.

He was a priest only for 23 days, but he will be for eternity, because this is the sacrament of Holy Orders which conforms man with Christ the priest, who offers himself to himself as a sacrifice.

Fr. Livinius used what little strength he had left to celebrate Mass from his bed.  Aware that he was dying, Father Livinus asked for a confessor and received communion.

Peaceful and in the company of his community, the African priest Livinus Esomchi Nnamani, 31 years old, died in Rome.