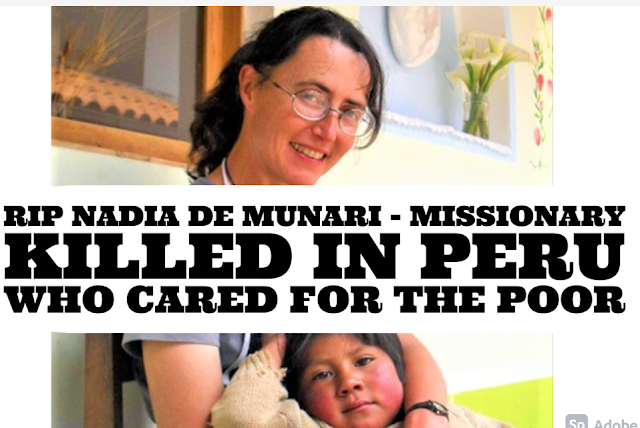 Agenzia Fides reports that Nadia de Munari, a 50-year-old Italian lay missionary died on Saturday 24, April after being brutally attacked with a machete while she was sleeping.

The woman, a lay missionary for Operation Mato Grosso, held a role of responsibility in the “Mamma mia” center. As reported by the local newspaper “Diario De Chimbote”, Nadia De Munari was attacked while she was in bed, and hit several times with a machete, apparently they also tried to strangle her with a metal rope. In fact, at 6.30 in the morning when the woman did not show up for the usual prayer, the other volunteers got worried. They found her in her room, in the blood, in a very serious condition: unconscious, but still alive. She received first aid in the Chimbote Regional Hospital, then she was transferred to Lima, where she was operated on, but she died due to the injuries in various parts of her body.

The Peruvian criminal police investigate the terrible murder since it took place in Nuevo Chimbote, a town overlooking the Pacific Ocean. The local newspaper hypothesizes a robbery that ended badly. Now it’s a hunt for the killer, or killers. The crime was condemned by the Bishop of the diocese of Chimbote, Mgr Ángel Francisco Simón Piorno, who called for a rapid investigation by the police. "I hope that the police will carry out investigations to find out who and what why this woman was killed" said the Bishop in a video statement sent to Agenzia Fides. For the Bishop of Chimbote, such a horrible crime puts the country in a difficult position, especially in the countries of origin of the missionaries who carry out an important humanitarian work in Peru: "What will the Europeans of Spain and Italy say who have their missionaries here? They will think that this is a semi-wild country because what they did to this woman cannot be described". Mgr. Simón Piorno recalled the social mission carried out by Nadia de Munari, who was responsible for six nurseries and an elementary school for 500 children and canteens for the poor that are part of Operation Mato Grosso. In addition to providing free food to minors and mothers with limited resources, the OMG carries out permanent social work for those most in need in the area. Nadia had met the OMG when she was 17, and had been in Peru for almost thirty years. She is remembered as a good, smiling, cheerful and selfless woman, who had dedicated her life to the disadvantaged, to the marginalized in society. (CE/SL) (Source: Agenzia Fides, 26/4/2021)