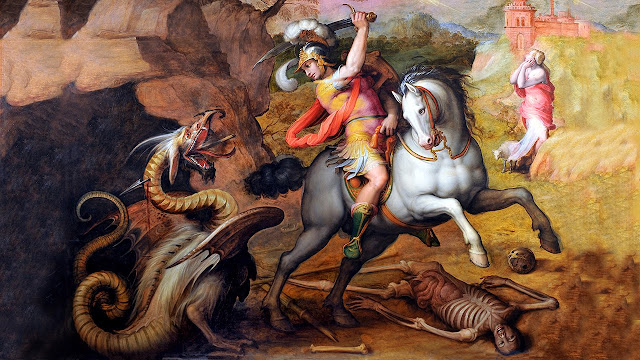 Born:
between ca. AD 275 and 281, Nicomedia, Bithynia, modern-day northwestern Turkey
Died:
April 23, 303, Lydda, Palestine
A Prayer to St George, for Intercession
Almighty and eternal God! With lively faith and reverently worshiping Thy divine Majesty, I prostrate myself before Thee and invoke with filial trust Thy supreme bounty and mercy. Illumine the darkness of my intellect with a ray of Thy heavenly light and inflame my heart with the fire of Thy divine love, that I may contemplate the great virtues and merits of Saint George and following his example imitate, like him, the life of Thy divine Son. Moreover, I beseech Thee to grant graciously, through the merits and intercession of this powerful Helper, the petition which through him I humbly place before Thee, devoutly saving, "Thy will be done on earth as it is in heaven." Vouchsafe graciously to hear it, if it redounds to Thy greater glory and to the salvation of my soul. Amen.