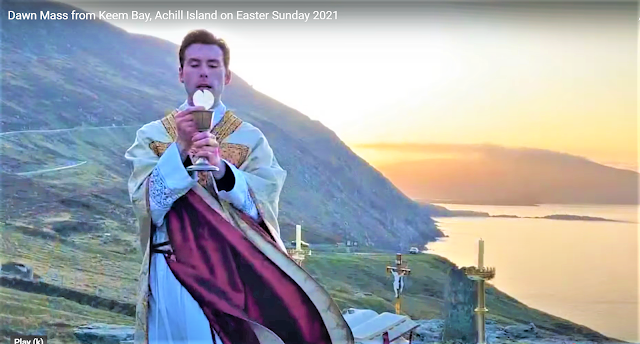 A young Catholic priest named Father Gerard Quirke of Achill parish in Ireland celebrated a 7am Easter Mass at an historic rock. The site  was used during the era of penal laws when Catholics endured restrictions on their civil liberties.

The Mass was live streamed on the site of Achill Island. It was held on a rock overlooking picturesque Keem Bay on Achill Island. The government of Ireland has some very strict pandemic laws which have closed all the churches.

According to "The Irish Times" the priest said, “Roman soldiers covered Jesus’s tomb with a stone; we are experiencing that at the moment, our churches are closed. But Christ was not bound by the stone or the tomb. Whenever we pray, whenever we enter into our devotions, watch Mass online, Christ is there. He’s not bound by stone and pillars. The stone will be moved away for us too.”