Most Rev. Basil Bhuriya (65), SVD, Bishop of Jabhua, Madhya Pradesh passed away on Thursday 6 May 2021 at 1.30pm due to cardiac arrest at St. Francis Hospital, Indore. He was undergoing Covid treatment.

Funereal will be conducted on Friday 7 May, 2021 at 10am at Annunciation Cathedral, Meghnagar, Jabhua.

Bishop Basil was born on 8 March 1956 in Panchkui, Diocese of Jhabua. He joined St. Thomas Seminary, Dhow, on 30 June 1969. He did his college studies at the University of Indore from 1976 to 1979 where he obtained B.A. degree. On 30 June 1979, he joined the Society of the Divine Word (SVD) as a novice. He studied Philosophy and Theology at the Pontifical Athenaeum of Pune. He made his solemn vows on 12 June 1985, and was ordained a priest on 2 May 1986 for the same Society of the Divine Word.

His Holiness Pope Francis appointed him the third Bishop of Jabhua on 18 July 2015. He was ordained Bishop on 10 October 2015. He is a priest for 35 years and a Bishop for 5 years. 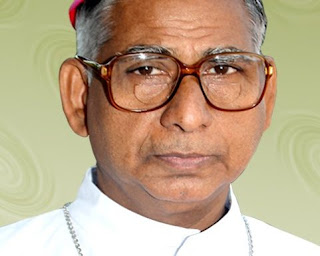 Archbishop Antony Anandarayar (75) Emeritus Archbishop of Pondicherry-Cuddalore passed away on Tuesday 4 May 2021 at 9.30pm at St. Thomas Hospital, Chennai. He was admitted in the hospital for Covid treatment and his health condition deteriorated this morning as the oxygen saturation level was very low.

Funeral will be held on Wednesday 5 May 2021 4pm at Immaculate Conception Cathedral, Pondicherry.

Archbishop Anandarayar was born on 18 July 1945 at in Varadarajanpet in Kumbakonam diocese. He joined St. Agnes’ Minor Seminary, Cuddalore for priestly studies and did his Philosophical and Theological studies at St. Peter’s Pontifical Seminary, Bangalore. He was ordained priest 21 December, 1971. Before appointing as the Bishop of Ootacamund, he served at St. Joseph’s Boarding, Cuddalore from1972-1976 as the Assistant. He held various positions in St. Peter’s Pontifical Seminary, Bangalore as the professor, vice rector and rector during the period 1981-1996. He was also the Chairman for the CCBI Commission for Canon Law and other Legislative Texts from 2006 to 2015.

He was appointed as the Bishop of Ootacamund diocese on 12 January 1997 and ordained Bishop on 29 January 1997. He was appointed as the Metropolitan Archbishop of Pondicherry-Cuddalore on 10 June, 2004. His request for resignation from the active episcopal ministry was accepted by Pope Francis on 27 January, 2021. He is a priest for 50 years and a Bishop for 24 years.