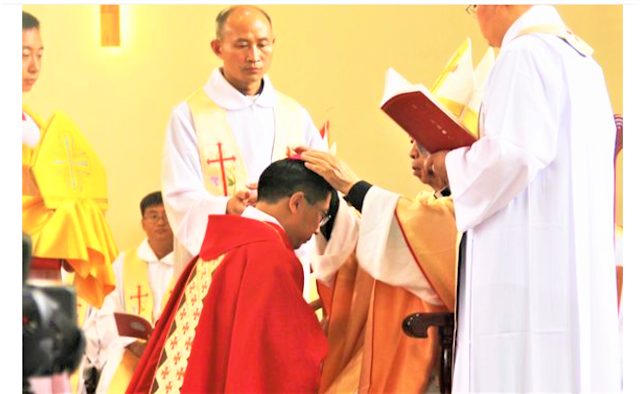 AsiaNews report:   In Xinxiang, China, the bishop, seven priests and 10 seminarians were arrested; Bishop Zhang Weizhu  has been imprisoned on other occasions.  A large number of policemen broke into the factory that served as a seminary and arrested the students and professors.

In the space of just two days, almost all the ecclesiastical personnel of the apostolic prefecture of Xinxiang were wiped out with an operation by the police forces of the province of Hebei.  Yesterday, on the 21st of May the bishop Msgr.  Zhang Weizhu;  the day before, seven priests and 10 seminarians were arrested.

On the early afternoon of May 20, at least 100 policemen from Hebei province - from Cangzhou, Hejian, and Shaheqiao - surrounded the building used as a diocesan seminary in Shaheqiao (Hebei).  Xinxiang, in fact, used a small factory owned by a Hebei Catholic as a seminary.  The police entered the building and arrested four priests, seminary professors, and three other priests who carry out pastoral work.  Together with them, 10 seminarians who attended lessons in the factory were arrested.

Following the directives of the New Regulations on religious activities, the factory was closed and the director of the company was arrested.

The apostolic prefecture of Xinxiang is not recognized by the Chinese government.  As a result  the activities of priests, seminarians and faithful are considered "illegal" and "criminal".

After the raid, the policemen confiscated all the personal effects of the priests and seminarians.

Given the huge deployment of police forces, the raid is thought to have been planned for some time.  The civil authorities believe that there are other seminarians who have managed to escape and are looking for them in the surrounding area.

Public security and police are going from house to house in search of them.  If they discover that there are signs attributable to the Catholic faith (crosses, statues, sacred images, photos of the pope, etc.), the owners are fined and the objects seized and destroyed.

According to many observers, since the signing of the provisional agreement between China and the Holy See, the persecution of Catholics - especially the unofficial ones - has increased.  The Agreement concerns only the appointment of new bishops, but had a premise that all outstanding issues regarding the life of the Church would remain on standby, to be addressed later in further dialogue between the two parties.  Instead the police forces have placed bishops under house arrest, imposed very high fines on the faithful, expelled parish priests from churches, arrested priests and seminarians.  For many faithful "the Agreement has been betrayed".

Mgr Giuseppe Zhang Weizhu, 63, was ordained a bishop in 1991 and has suffered several periods of imprisonment.  The apostolic prefecture of Xinxiang has 100,000 faithful.