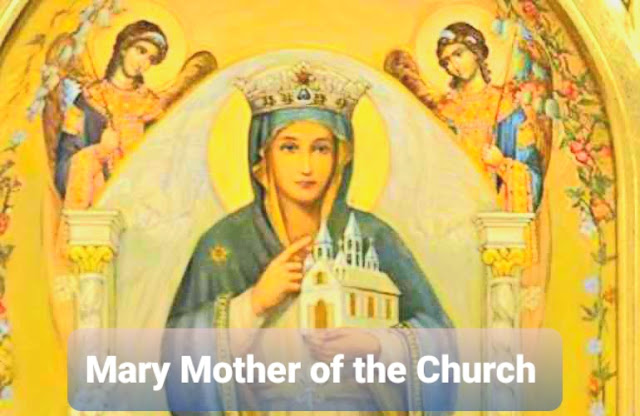 Memorial of the Blessed Virgin Mary, Mother of the Church
Lectionary: 572A
Reading 1 Genesis 3:9-15, 20
After Adam had eaten of the tree,
the LORD God called to him and asked him, “Where are you?”
He answered, “I heard you in the garden;
but I was afraid, because I was naked,
so I hid myself.”
Then he asked, “Who told you that you were naked?
You have eaten, then,
from the tree of which I had forbidden you to eat!”
The man replied, “The woman whom you put here with me—
she gave me fruit from the tree, and so I ate it.”
The LORD God then asked the woman,
“Why did you do such a thing?”
The woman answered, “The serpent tricked me into it, so I ate it.”

Then the LORD God said to the serpent:
“Because you have done this, you shall be banned
from all the animals
and from all the wild creatures;
On your belly shall you crawl,
and dirt shall you eat
all the days of your life.
I will put enmity between you and the woman,
and between your offspring and hers;
He will strike at your head,
while you strike at his heel.”
The man called his wife Eve,
because she became the mother of all the living.
Or

Acts 1:12-14
After Jesus had been taken up to heaven,
the Apostles returned to Jerusalem
from the mount called Olivet, which is near Jerusalem,
a sabbath day’s journey away.

GospelJN 19:25-34
Standing by the cross of Jesus were his mother
and his mother’s sister, Mary the wife of Clopas,
and Mary of Magdala.
When Jesus saw his mother and the disciple there whom he loved,
he said to his mother, “Woman, behold, your son.”
Then he said to the disciple,
“Behold, your mother.”
And from that hour the disciple took her into his home.
After this, aware that everything was now finished,
in order that the Scripture might be fulfilled,
Jesus said, “I thirst.”
There was a vessel filled with common wine.
So they put a sponge soaked in wine on a sprig of hyssop
and put it up to his mouth.
When Jesus had taken the wine, he said,
“It is finished.”
And bowing his head, he handed over the spirit.

Now since it was preparation day,
in order that the bodies might not remain on the cross on the sabbath,
for the sabbath day of that week was a solemn one,
the Jews asked Pilate that their legs be broken
and they be taken down.
So the soldiers came and broke the legs of the first
and then of the other one who was crucified with Jesus.
But when they came to Jesus and saw that he was already dead,
they did not break his legs,
but one soldier thrust his lance into his side,
and immediately Blood and water flowed out.

Prayer to make Spiritual Communion:People who cannot communicate now make spiritual communion.At your feet, O my Jesus I bow down and offer you the repentance of my contrite heart, which abysses itself into its nothingness and Your holy presence. I adore you in the Sacrament of Your love, the ineffable Eucharist. I wish to receive you in the poor home that my heart offers you. In anticipation of the happiness of sacramental communion, I want to possess you in spirit. Come to me, oh my Jesus, that I may come to you. May Your love inflame my whole being, for life and death. I believe in you, I hope in you, I love you. So be it. Amen