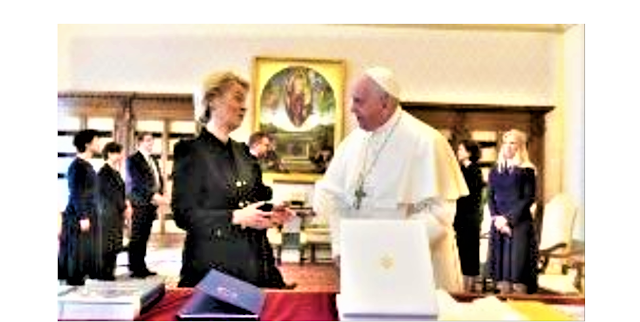 Vatican News reports that on Saturday, May 22, 2021 at the Vatican Pope Francis met with the President of the European Commission, Ursula von der Leyen, who spoke to Vatican News in this exclusive interview. (See below)

During their private meeting, Pope Francis and European Commission President Ursula von der Leyen noted the good bilateral relations between the Holy See and the European Union, including the initiatives underway to celebrate the 50th anniversary of the establishment of diplomatic relations.

A statement by the Holy See Press Office also mentioned their discussions on human and social development issues affecting the continent, also in view of the recently launched Conference on the Future of Europe. Both leaders also looked at other issues of common interest, such as the social consequences of the pandemic, and the topics of migration, climate change, and recent developments in the Middle East.

Vatican News’ Mario Galgano met up with Ursula von der Leyen and asked her a number of questions on these topics.