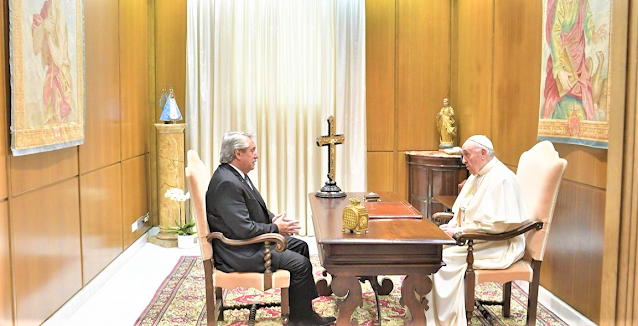 Vatican News reports that Pope Francis met Thursday with the President of Argentina, Alberto Fernández, at a private audience in the Vatican. By Vatican News staff writer The Holy See Press Office announced Thursday that Pope Francis met with Argentine President Alberto Fernández during a private audience in the Paul VI Hall. The communique said the talks were cordial and that appreciation was expressed for the “good bilateral relations”. The Pope and the president discussed the situation in Argentina, “with particular reference to certain issues such as the management of the pandemic emergency, the economic and financial crisis, and the fight against poverty.” The two also noted the “significant contribution that the Catholic Church has offered and continues to provide.” Finally, concluded the statement, “some regional and international issues were mentioned.” President Fernández then met separately with Cardinal Secretary of State Pietro Parolin and Archbishop Paul Richard Gallagher, Secretary for Relations with States. (Vatican News va)
On his Twitter page the President wrote: "In my reunion with Pope Francis, we talked about the problems that the world and Argentina are going through. I appreciate your support for the recovery of Argentina.
His leadership for equality guides us and commits us to a more humane world."