Pope Francis says "...when this universality of love is missing, politics fails, and becomes sick or bad." at Meeting with Youth 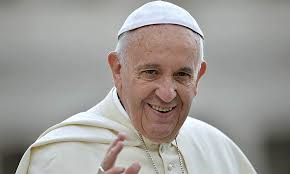 The Holy Father Francis visited the Scholas Occurrentes headquarters   in the Palazzo Saint Calisto in Rome, on the occasion of the opening of the new  Scholas offices in five continents.

During the visit, the Pope met young people from different regions who present the conclusions of the meeting held in Madrid in recent days, on the theme: "Dreaming together the way to a better future."

The Pontifical Foundation Scholas Occurrentes, is an International Organisation of Pontifical Rite, begun by Pope Francis.  It seeks “to answer the call to create a culture of encounter and bring young people together in an education that generates meaning." It is present through its network in 190 countries and reaches more than 1 million children.
The Pope greeted some young people who, according to the President of Scholas, "worked hard during the pandemic."

"What does it mean to work hard?" the Holy Father asked. "We couldn't go out physically but we went out with our minds," said one boy. And the Pope responded, "That's the key! To go out... because if you remain in yourself you become corrupted. Like water that when it runs is pure, and when it stops becomes stagnant."
The Pope was then greeted by Argentine first lady, Fabiola Yáñez, who is engaged in the work of Scholas. Politics is defeated where there is war Responding to the question "how can young people change politics?", asked by a young boy, Pope Francis said that there is one test to see if politics fulfills its mission as "the highest and greatest form of charity" and to verify "the honorability of a nation", and that is war. "When they talk to me about how politics is in the world, I say: look where there are wars; there is the defeat of politics. A form of politics that is not able to dialogue to avoid a war is defeated; it's over."

"The test on politics is war; the test on the honorability of a nation for me is: 'Do you make weapons? Do you promote wars? Do you earn your wealth because you sell weapons so others can kill themselves?' It is there that we can see if a nation is morally sound," said the Pope. "Even to me," he added, "I say sincerely, it hurts my heart when I see priests blessing weapons. Instruments of death are not blessed."
"Love is political, that is, social for everyone. And when this universality of love is missing, politics fails, and becomes sick or bad." Finally, the Pope called for dialogue because "different opinions" are "the key in politics", which must always aspire to "unity and harmony."