Archdiocese of Santa Fe Office released the following statement after the death of a Catholic priest from their archdiocese (biography below) : 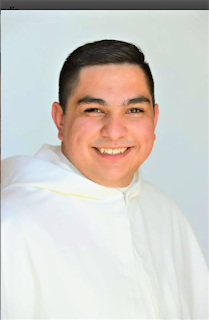 Abbey when they were struck by another vehicle. It is with profound sadness that we in the Archdiocese of Santa Fe heard the news of Father Graham Golden’s tragic death as a result of a car accident this past Friday night. I extend to Abbot Joel Garner, O. Praem., and all the Norbertines, our deepest sympathy and assurance of prayers during these days of grief and loss. Father Graham lived the charisms of the Norbertines fully and with great enthusiasm. He was deeply contemplative and energetically apostolic. He found the time to be present at just about every archdiocesan event, meeting, celebration, and liturgy one could imagine. He sat on numerous boards and was always available to help. He was filled with a contagious joy and at the same time, capable of plumbing the depths of human struggle and challenge. I cannot even imagine how much he will be missed by his beloved community at Santa Maria de la Vid Abbey. He will be missed by all of us in the Archdiocese of Santa Fe as well and by all those whose lives he touched – and there were many. Eternal rest grant unto Father Graham, O Lord. May he rest in peace. May his soul and all the souls of the faithful departed, through the mercy of God, rest in peace.

ReverendGraham Golden, O. Praem., 35, died in an automobile accident on May 21. Fr. Graham was born to Dan and Deborah Golden on January 8, 1986, in Albuquerque. He was a proud graduate of St. Pius X High School (2004) and a magna cum laude graduate of the University of New Mexico with a BA in Music and Spanish (2008). He entered the Norbertine Community of Santa Maria de la Vid Abbey in 2008. After his two-year novitiate, he attended Catholic Theological Union and the University of Chicago where he received a Master's Degree from each school.In 2015 he was ordained a Catholic priest. Fr. Graham entered the Norbertine Community with a desire to serve the poor and marginalized. Already as a seminarian he served as an intern for the Catholic Campaign for Human Development in the Archdiocese of Santa Fe. The Campaign works to address the plague of poverty. After ordination, Fr. Graham worked with The Catholic Foundation as a Regional Council Coordinator to assess the needs of rural communities, particularly in Northern New Mexico. Subsequently, he served as associate and then pastor of Our Lady of the Most Holy Rosary Catholic Community (2018), and most recently became pastor of St. Augustine Parish at Isleta Pueblo. Fr. Graham was also the archdiocesan coordinator for the annual Pilgrimage for Vocations.At Santa Maria de la Vid Abbey he had multiple responsibilities: vocation director, formation director for seminarians, founder of the Office of Christian Discipleship and Religious Vocation, as well as initiator of the annual Art at the Abbey Exhibition.Fr. Graham was an extraordinarily dedicated, talented, and intelligent young priest. His pastoral heart touched many individuals and groups during the short six years of his priesthood. There is no replacing him.Fr. Graham is survived by his parents, Dan and Deborah Golden, his sister Aiyuan and nephew Qiao Rong, and his Norbertine Brothers and Sisters.A viewing will begin at 5:00 pm on Thursday, May 27, 2021, followed by a Vigil Service at 7:00 pm, both at Our Lady of the Most Holy Rosary Catholic Church, 5415 Fortuna Rd. NW, Albuquerque. The Funeral Mass will also be celebrated at Holy Rosary Church on Friday May 28, 2021, 10:30 am with Abbot Joel Garner, O. Praem., presiding.