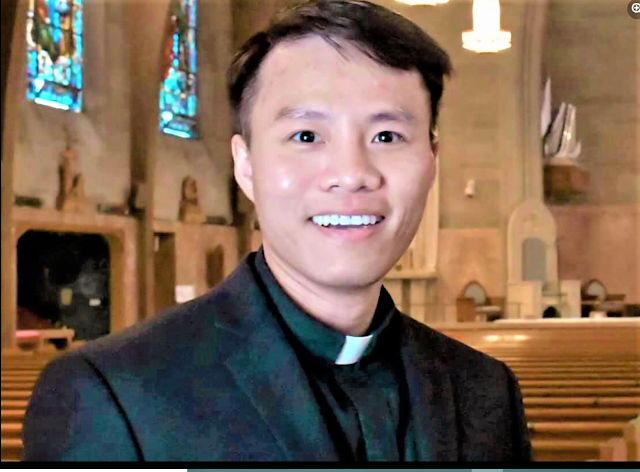 On Tuesday, May 11, 2021 at night, a Vietnamese seminarian, age 29, was tragically killed in a hit-and-run accident in Manhattan, New York, USA. The driver, Jonathan Sutherland, age 23, is in custody and is suspected of having been intoxicated while driving. Tran was a first-year theology student at the Immaculate Conception Seminary at Seton Hall University in South Orange, New Jersey, according to the diocese.
The Bishop wrote a personal letter; see below:
Diocese press release:

A letter from Bishop Checchio on the loss of Seminarian Ngu Quoc "Peter"
May 12, 2021
Dear Brothers and Sisters in Christ,

So often, I tell you about our wonderful seminarians. I suspect sometimes that you might even get tired of hearing me brag about them, but they offer so much hope for the future. They are a committed group of young men, who inspire me as they grow in deeper friendship with Jesus while preparing to lay down their lives in service of Him and our diocese.

Now, I have some very tragic news to share with you. Early this morning, I received a phone call from the Rector of the Seminary of the Immaculate Conception in South Orange, to tell me that one of our seminarians, Ngu Quoc Tran, or “Peter,” as he was affectionately called by those who knew him, lost his life in a hit-and-run accident in Manhattan’s East Side on Tuesday evening.

Any time we hear of the sudden loss of life, especially the loss of someone so young, it is heartbreaking. But the tragic loss of Peter, who was only 29 – the loss to his family, to his brother seminarians and to our local Church – is immense and would be insufferable without our Catholic faith and trust in our Heavenly Father.

The driver of the vehicle that hit Peter, was reported to have been intoxicated and fled the scene. The driver was later arrested when his car was involved in another collision and was identified as the car that hit Peter.

Upon hearing the news, I first turned to the Lord in prayer and then drove to Immaculate Conception Seminary, where I celebrated Mass and visited with the seminarians there. I was joined too by Msgr. John N. Fell, our director of seminarians; Fr. Mauricio Tabera-Vasquez, our vocations recruiter; and Fr. Peter Tran, pastor of Our Lady of Czestochowa Parish in South Plainfield, and coordinator of our diocesan Vietnamese Apostolate, all of whom concelebrated the Mass.

Born and raised in the An Giang Province in the south of Vietnam, Peter was the son of Khai Quang Tran and Bich Thi Ngoc and was one of six siblings. Funeral arrangements are pending at this time.

He moved to the United States in August 2017 and lived at the Saint John Vianney House of Discernment in Highland Park, a place where men who are working or attending college can live as they discern their vocational calling and the possibility of priesthood. In spring 2018, he began pre-theology studies at Saint Vincent Seminary, Latrobe, PA, and later went on to continue his priestly formation at Immaculate Conception Seminary in South Orange, in the fall of 2019.

In our diocese, he served in summer assignments at Our Lady of Czestochowa Parish, South Plainfield; Saint James the Less Parish, Jamesburg; Saint Bernard of Clairvaux Parish, Bridgewater; and the Parish of the Visitation, New Brunswick.

Peter was a prayerful and loving person, who was always at the service of others. He was well-known in our parishes and was a welcoming face, always talking with the parishioners after Mass and building friendships with those serving in parish ministries. He will be incredibly missed in our diocese.

From every interaction with Peter, even from his application to become a seminarian for our diocese, it was evident that he had a strong friendship with Jesus Christ, a great devotion to the Blessed Sacrament, and a love for our Blessed Mother. He was a prayerful and faithful man, so even through this challenging time, I know he would encourage prayer.

So, I ask you to please join me in praying for Peter, his family, his brother seminarians and the many affected by this terrible loss. We pray too for the young man who killed Peter, invoking God's mercy on all of us.

Through our sorrows and pain, our Blessed Mother is with us and is undoubtedly accompanying Peter to the merciful embrace of her son, Jesus. Given Peter's goodness that we knew in this life, I have no doubt that when he is in that loving embrace of our Lord, Peter will be telling Him about all of us here in Metuchen and asking the Lord's blessing on us.

I thank God for all of you, and am praying for you, even as I ask for your prayers too.

With renewed best wishes, I remain