Saint May 21 : St. Godric of Finchale a Hermit who Prayed with many Tears for Grace 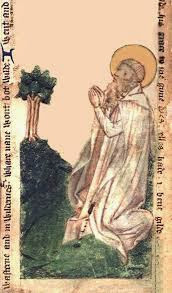 After making a pilgrimage to St. Giles in France, and to Rome, he went to the north of England in order the better to carry into execution his design of devoting himself wholly to a retired life. A fervent servant of God, named Godwin, who had passed a considerable time in the monastery of Durham, and by conversing with the most holy monks and exercising himself in the interior and exterior practices of all virtues, was well qualified to be a director to an inexperienced novice, joined our saint, and they led together an austere anchoretical life in a wilderness situated on the north to Carlisle, serving one another, and spending both the days and nights in the praises of God. After two years God called Godwin to himself by a happy death after a short sickness. St. Godrick having lost his companion, made a second painful pilgrimage to Jerusalem. After his return he passed some time in the solitude of Streneshalch, now Whitby; but after a year and some months went to Durham to offer up his prayers before the shrine of St. Cuthbert, and from thence retired into the desert of Finchal, or Finkley, three miles from Durham, near the river Wear. St. John Baptist and St. Cuthbert he chose for his principal patrons and models. The austerities which he practiced are rather to be admired than imitated. He had his regular tasks of devotion, consisting of psalms and other prayers which he had learned by heart, and which he constantly recited at midnight, break of day, and the other canonical hours, besides a great number of other devotions. Though he was ignorant of the very elements of learning, he was too well experienced in the happy art of conversing with God and his own soul ever to be at a loss how to employ his time in solitude. Whole days and nights seemed too short for his rapturous contemplations, one of which he often wished with St. Bruno he could have continued without interruption for eternity, in inflamed acts of adoration, compunction, love, or praise. His patience under the sharpest pains of sicknesses or ulcers, and all manner of trials, was admirable; but his humility was vet more astonishing. His conversation was meek, humble, and simple. He concealed as much as possible from the sight and knowledge of all men whatever might procure their esteem, and he was even unwilling any one should see or speak with him. Yet this he saw himself obliged to allow on certain days every week to such as came with the leave of the prior of Durham, under whose care and obedience he died. A monk of that house was his confessor, said mass for him, and administered him the sacraments in a chapel adjoining to his cell, which the holy man had built in honor of St. John Baptist. He was most averse from all pride and vanity, and never spoke of himself but as of the most sinful of creatures, a counterfeit hermit, an empty phantom of a religious man: lazy, slothful, proud, and imperious, abusing the charity of good people who assisted him with their alms. But the more the saint humbled himself, the more did God exalt him by his grace, and by wonderful miraculous gifts. For several years before his death he was confined to his bed by sickness and old age. William of Newbridge, who visited him during that time, tells us that though his body appeared in a manner dead, his tongue was ever repeating the sacred names of the three divine Persons, and in his countenance there appeared a wonderful dignity, accompanied with an unusual grace and sweetness. Having remained in the desert sixty-three years, he was seized with his last illness, and happily departed to his Lord on the 21st of May, 1170, in the reign of Henry II. His body was buried  in the chapel of St. John Baptist. Many miracles confirmed the opinion of his sanctity, and a little chapel was built in his memory by Richard, brother to Hugh Pidsey, bishop of Durham. See William of Newbridge, 1. 2, c. 20; Matthew Paris, Matthew of Westminster, his life written by Nicholas of Durham his confessarius, and abridged by Harpsfield, Saec. 12, c. 45. Source : Lives of the Saints by Alban Butler