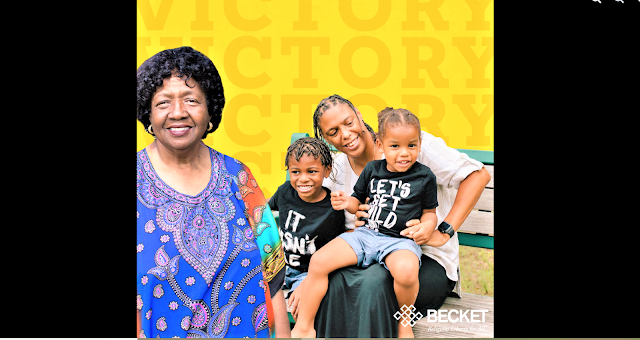 Victory for religious freedom, as the Supreme Court unanimously rules that the state can’t shut down a Catholic adoption agency that would not compromise its Christian beliefs. In 2018, the city of Philadelphia canceled its contracts with Catholic Social Services due to its religious beliefs about marriage, removing hundreds of children in the process.

WASHINGTON – The Supreme Court just ruled in favor of “exemplary” foster mothers Sharonell Fulton and Toni Simms-Busch, allowing these foster care heroes to continue serving children in need in partnership with the Catholic foster ministry that has been serving Philadelphia for over 200 years. Catholic Social Services supports foster mothers like Sharonell and Toni and serves children without regard to race, religion, or sexual orientation. Thanks to today’s decision, it can continue that vital work. In the Court’s unanimous decision, Chief Justice Roberts made clear that the city cannot exclude foster parents like Sharonell and Toni or Catholic Social Services simply because city officials disagree with the religious agency’s sincere Catholic beliefs about marriage. The Justices also recognized that protecting faith-affirming agencies will ensure foster children in need have every opportunity available to find a loving home. As the Court explained, “[t]he City apparently prefers to risk leaving children without foster parents than to allow CSS to follow its religiously dictated policy, which threatens no tangible harm.”

The Court’s opinion also confirmed “CSS has ‘long been a point of light in the City’s foster-care system.’ CSS seeks only an accommodation that will allow it to continue serving the children of Philadelphia in a manner consistent with its religious beliefs.” The decision is a strong message in favor of religious freedom: “so long as the government can achieve its interests in a manner that does not burden religion, it must do so.”

Today’s decision recognizes that diverse foster agencies will help diverse families thrive. Catholic Social Services welcomes women of color like Sharonell and Toni and is committed to serving those most in need. More than 70 percent of the children supported by this religious ministry’s foster care program are racial minorities.

“I am overjoyed that the Supreme Court recognized the important work of Catholic Social Services and has allowed me to continue fostering children most in need of a loving home,” said foster mom and named plaintiff Sharonell Fulton. “My faith is what drives me to care for foster children here in Philadelphia and I thank God the Supreme Court believes that’s a good thing, worthy of protection.”

“The Justices understand that foster parents like me share in the common, noble task of providing children with loving homes,” said Toni Simms-Busch, also a foster mom and named plaintiff. “Our foster-care ministry in Philadelphia is vital to solving the foster care crisis and Catholic Social Services is a cornerstone of that ministry. The Supreme Court’s decision ensure the most vulnerable children in the City of Brotherly Love have every opportunity to find loving homes.”

Becket Senior Counsel Lori Windham argued on behalf of Sharonell, Toni, and Catholic Social Services, explaining to the Supreme Court how the First Amendment protects the right of religious organizations to serve those in need without giving up the religious beliefs that motivate their ministry.

“It’s a beautiful day when the highest court in the land protects foster moms and the 200-year-old religious ministry that supports them,” said Lori Windham, senior counsel at Becket who argued the case in Fulton. “Taking care of children, especially children who have been neglected and abused, is a universal value that spans all ideological divides. Today, I am grateful that the Supreme Court protected heroes of the foster care system like Sharonell and Toni, who give of themselves daily to care for children in need.”

Experts share their support for the Supreme Court's decision to protect faith-affirming foster care
“Today’s decision is a victory for the hundreds of thousands of kids in foster care. They need all hands on deck—families and agencies of all faiths and no faith to support them. The Court has recognized that we cannot let culture war battles stand in the way of providing homes for vulnerable children.”
-- Naomi Schaefer-Riley
Resident Fellow at the American Enterprise Institute specializing in adoption and child welfare “Today’s landmark decision in Fulton v. City of Philadelphia will protect vulnerable children’s profound interest in finding and forming families by ensuring that they will have access to more, not fewer, prospective adoptive parents.”
-- Tim Keller
Senior Vice-President and Legal Director at Gen Justice
“I am grateful to the Supreme Court for upholding religious liberty. At a time when we are facing a shortage of foster homes, it’s imperative we have all hands on deck to combat this crisis. Today, the Supreme Court’s decision made that possible.” -- Melissa Buck
Foster and adoptive parent to 6 children