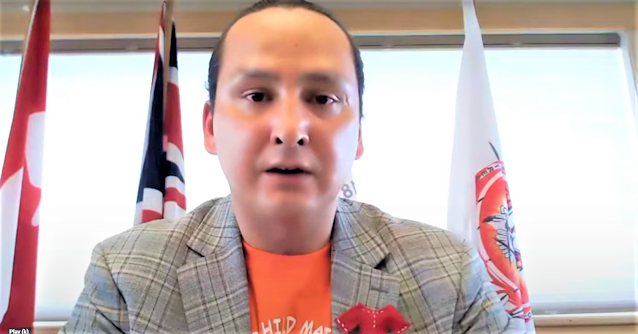 The chief of the Cowessess First Nation, Cadmus Delorme (pictured), in Saskatchewan, announced on Thursday, June 24, 2021, that it found 751 unmarked graves on the grounds of the former Marieval Indian Residential School in Saskatchewan. The discovery comes less than a month after the remains of 215 Indigenous children were discovered at a former residential school in Kamloops, British Columbia. The Truth and Reconciliation Commission of Canada concluded that these schools – which operated from the mid-19th century through the late 20th century – constituted a form of “cultural genocide” against Canada’s Indigenous peoples.
The Archbishop of Regina, Saskatchewan, offered an apology:
LETTER TO CHIEF CADMUS AND THE PEOPLE OF COWESSESS FIRST NATION

Dear Chief Cadmus, dear people of Cowessess First Nation,
Words fail in the face of the news that the ground penetrating radar search at the Cowessess cemetery has revealed an unthinkable number of unmarked graves, up to 751 people buried there. The news is overwhelming and I can only imagine the pain and waves of emotion that you and your people are experiencing right now. Thank you for your powerful words, Chief Cadmus, at the press conference this morning, and for the witness of Knowledge Keeper Florence and FSIN Chief Bobby Cameron.
The grave site findings on your First Nation impact us on a deeper level because of the relationships we’ve built with so many members of the Cowessess First Nation. Several Cowessess members have been involved in the Archdiocese of Regina’s Commission for Truth and Reconciliation, or have worked with us on projects trying to address the Calls to Action. Because of that network of relationships, we feel even more intensely the overwhelm of this moment.
The grave site work brings us face to face with the brutal legacy of the Indian Residential School system, a product of a colonialist history which has left so much suffering and intergenerational trauma. The operation of the Marieval Residential School at Cowessess left many people deeply wounded by various kinds of abuse. As you have communicated elsewhere, Chief Cadmus, even for those of us who were not there or not involved, it is nonetheless the painful legacy that we need to carry. The incredible burden of the past is still with us, and the truth of that past needs to come out, however painful, as only truth can lead to reconciliation. As you said of the grave site, “the truth is there.” Thank you for your courage as Chief and that of your whole community as you seek out the truth and search for a reset that brings an end to racism and opens a path to justice and to healing.
It was 3 years ago that you first wrote to me about the cemetery at Cowessess, about the Calls to Action that called for churches who had been involved in residential schools to assist in various ways with cemeteries, and about the need for work at the Cowessess cemetery. As we entered into conversation you and others from Cowessess shared about the many unmarked graves, about terrible abuse and suffering that happened at the residential school, and about how one priest who served in the region in the 1960's destroyed headstones in a way which was reprehensible. Two years ago at Flower Day you gave me the privilege of sharing a few words with members of your community gathered at the cemetery, and I extended an apology for the failures and sins of Church leaders and staff in the past towards the people of Cowessess. I know that apologies seem a very small step as the weight of past suffering comes into greater light, but I extend that apology again, and pledge to do what we can to turn that apology into meaningful concrete acts -  including assisting in accessing information that will help to provide names and information about those buried in unmarked graves - and to stand by you in whatever way you request.
With you as able at this most difficult of times.

+ Don Bolen
Archbishop of Regina
Source: https://archregina.sk.ca/news/2021/06/24/letter-chief-cadmus-and-people-cowessess-first-nation
The video below of Archbishop Bolen was made before the discovery in Saskatchewan: