Pope Francis Meets with US Secretary of State, Anthony Blinken, at the Vatican - VIDEO 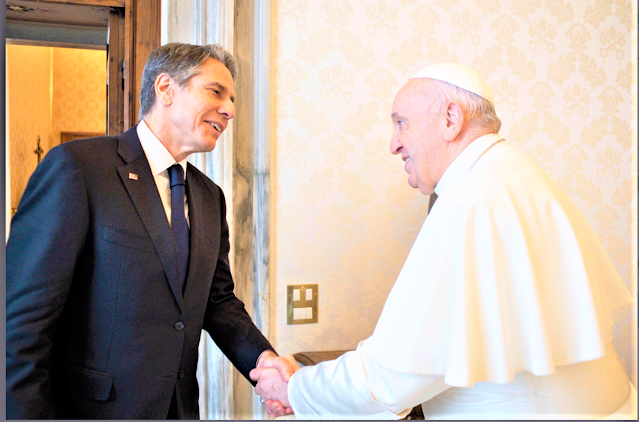 Pope Francis met with the United States Secretary of State, Anthony Blinken, in an audience at the Vatican. The Pope switched to speaking Italian after greeting the Secretary of State, saying, “Because I don't speak good English.” The meeting lasted almost 40 minutes, during which the Pope spoke of his trip to the United States in 2015. The Secretary gave the Pope a statue of a dove carrying an olive branch, a symbol of peace and freedom.
In return, the Pope gave him a bronze sculpture, with an engraving that reads: “Let us fill our hands with the hands of others.” He also gave Secretary Blinken the significant texts of his pontificate, including the document on human fraternity he produced with the Grand Imam Ahmad Al-Tayyeb of Egypt.
The Pope also gave him rosaries, which he blessed for the Secretary's family.

It was my great honor to meet today with His Holiness @Pontifex in Vatican City. I am extremely grateful for his leadership and commitment to tackling the climate crisis and promoting human rights and human dignity around the world. pic.twitter.com/KetBbGnhBG

Before meeting with the Pope, Blinken met with the Vatican Secretary of State, Cardinal Pietro Parolin, and foreign minister Archbishop Paul Gallagher. Secretary Blinken is concluding a week-long tour through Europe to discuss rebuilding society after the pandemic with the continent's leaders. On twitter, Bleinken spoke favorably of his visit and mentioned he was speechless while touring the Sistine Chapel during his visit.
Matteo Bruni explained that “it offered the Pope the occasion...to express his affection for the the people of America.” (Edited from Vatican News and Rome reports)

Today I had the great pleasure of touring the Vatican, including the beautiful Sistine Chapel. The spiritual atmosphere, the divine art, and the impressive architecture left me speechless. Truly stunning. pic.twitter.com/aa1jrzTojV