Pope Francis says "The Holy Family of Jesus, Joseph and Mary to whom you have chosen to consecrate the Middle East represents your identity..." to Eastern Patriarchs - FULL TEXT 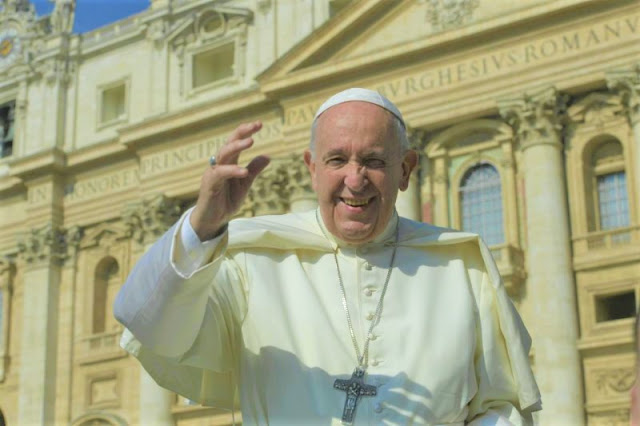 TO THE CATHOLIC PATRIARCHS OF THE MIDDLE EAST

With joy I accepted the invitation you addressed to me to join you on this special day, on which each of you celebrates a Divine Liturgy with your faithful to invoke the gift of peace in the Middle East from the Lord and consecrate it to the Holy Family.

Since the beginning of my Pontificate I have tried to bring myself close to your sufferings, both by making myself a pilgrim first in the Holy Land , then in Egypt , in the United Arab Emirates and finally a few months ago in Iraq , and by inviting the whole Church to prayer and solidarity. concrete for Syria, Lebanon, so tried by war and social, political and economic instability. Then I remember well the meeting of 7 July 2018 in Bari , and I thank you because with your gathering today you are preparing hearts for the convocation of next July 1 in the Vatican , together with all the heads of the Churches of the Land of the Cedars.

The Holy Family of Jesus, Joseph and Mary to whom you have chosen to consecrate the Middle East represents your identity and your mission well. First of all it guarded the mystery of becoming flesh of the Son of God, it was constituted around Jesus and by reason of him. Mary gave it to us, through her yes to the angel's announcement in Nazareth, Joseph welcomed him, also remaining while asleep listening to God's voice and being ready to do His will once awakened. A mystery of humility and dispossession, as in the birth of Bethlehem, recognized by the little ones and those far away, but threatened by those who were more attached to earthly power than to be amazed at the fulfillment of God's promise. To guard the Word made flesh, Joseph and Mary set out, going to Egypt, combining the humility of birth in Bethlehem with the indigence of people forced to emigrate. In this way, however, they remain faithful to their vocation and unconsciously anticipate that destiny of exclusion and persecution that will become of Jesus when he becomes an adult who will however disclose the Father's response on Easter morning.

The consecration to the Holy Family also calls each of you to rediscover as individuals and as a community your vocation to be Christians in the Middle East, not only by asking for the right recognition of your rights as original citizens of those beloved lands, but by living your mission. of custodians and witnesses of the first apostolic origins. On my trip to IraqI have used on two occasions the image of the carpet, which the skilled hands of the men and women of the Middle East know how to weave, creating precise geometries and precious images, the result of the intertwining of numerous threads that become a masterpiece only by being together side by side . If violence, envy, division, can come to tear even one of those threads, the whole is wounded and disfigured. At that moment, human plans and agreements can do little if we do not trust in the healing power of God. Do not try to quench your thirst at the poisoned sources of hatred, but let the furrows of the field of your hearts irrigate with the dew of the Spirit, as the great saints of your respective traditions: Coptic, Maronite, Melkite, Syriac, Armenian, Chaldean, Latin.

How many civilizations and dominations have arisen, flourished and then fallen, with their admirable works and conquests on the ground: everything has passed. Beginning with our father Abraham, the Word of God has continued to remain a lamp that has illuminated and illuminates our steps.

I leave you peace, I give you my peace, the Risen Lord said to the disciples still afraid in the Upper Room after Easter: I too, thanking you for your witness and your persevering in the faith, invite you to live the prophecy of human brotherhood, which was at the center of my meetings in Abu Dhabi and Najaf , as well as in my Encyclical Letter Fratelli Tutti .

Really be the salt of your lands, give flavor to social life eager to contribute to the construction of the common good, according to those principles of the Social Doctrine of the Church so much in need of being known, as had been indicated by the Post-Synodal Apostolic Exhortation Ecclesia in Medio Oriente and as you wished to recall by commemorating the 130th anniversary of the encyclical letter Rerum Novarum .

As I cordially impart my Apostolic Blessing to all those who have participated in this celebration and to those who will follow it through the media, I ask you to pray for me.