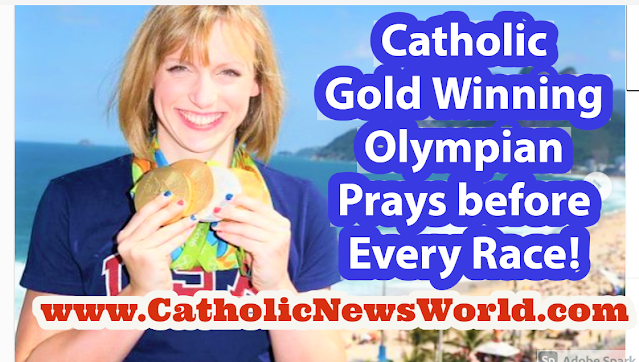 Katie Ledecky is an American swimmer who has won 6 Olympic gold medals and 15 world championship gold medals, the most in history for a female swimmer!  In Tokyo, she won Gold (1500m) and 2 Silver medals. Over her career, she has won 36 medals (29 golds, 6 silvers, and 1 bronze) in major international competitions, during the Summer Olympics, World Championships, and Pan Pacific Championships. Also, she has broken fourteen world records.

Kathleen Genevieve Ledecky was born March 17, 1997 and is an American competition swimmer, She is a six-time Olympic gold medalist, and fifteen-time world champion.

In an Interview with the Catholic Standard she explained how Catholic schools helped her. “I attended Catholic schools from pre-K through high school. I attended Little Flower School in Bethesda through 8th grade and then Stone Ridge School of the Sacred Heart for high school I received an excellent, faith-filled education at both schools. Having the opportunity to attend academically rigorous schools has facilitated my interest in the world and in serving others, and has enriched my life so that it is not solely focused on my swimming and athletics. Nevertheless, going to these schools was important to my swimming – my Catholic schools challenged me, they broadened my perspective and they allowed me to use my mind in ways that take me beyond just thinking about swim practices, swim meets and sports." Ledecky was born in Washington, D.C., She is the daughter of Mary Gen (Hagan) and David Ledecky. Her father's ancestry is from Czechoslovakia and her mother is of Irish descent. Ledecky was raised Catholic. Ledecky began swimming at the age of six.Her godfather, Father Jim Shea, S.J., is a priest. In the Standard she explained, '“My Catholic faith is very important to me. It always has been and it always will be. It is part of who I am and I feel comfortable practicing my faith. It helps me put things in perspective.” She explained that she prays a Hail Mary before each race. “I do say a prayer – or two – before any race. The Hail Mary is a beautiful prayer and I find that it calms me.”
SHARE her Amazing Story - maybe you'll inspire another Athlete to Love God!